The Aircraft Carrier Won't be the Dominant Navy Vessel Forever 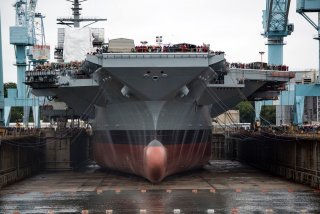 Here's What You Need to Know: The aircraft carrier will not be the relevant weapon in the second half of the century.

That day has already come. As of early 2014, the Navy only has 10 operational supercarriers. Sequestration delayed the deployment of the Harry S. Trumanand has the Navy scrambling to come up with funds to refuel the Abraham Lincoln, raising the question whether the latter will ever come back into service.

The Navy’s own acquisitions chief recently told Congress that given the current trends and budget outlook, the Navy could slip to as few as 240 shipsin the next several decades.

Stating that the “plan may prove unexecutable,” the GAO added that the Fordwill be unlikely to fill the gap created by the scheduled decommissioning of the Enterprise. Worse, the Ford would “likely face operational limitations that extend past commissioning and into initial deployments.”