Aircraft Carriers and Battleships Rule: These 5 Dominate the Seas 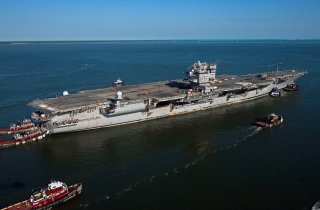 Here's What You Need to Remember: Like her sister ships, Roosevelt has already undergone substantial modification across the course of her thirty year career, and the Navy expects that these refits will continue into the future. Current projections suggest that she will leave service around 2035, which would give the carrier a nearly fifty-year span of lethality.