Is the AK-47 Still the Rifle of Choice for Russia? 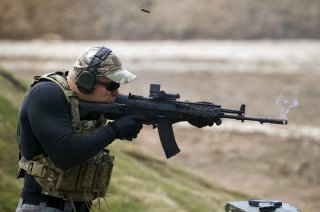 To be clear, the Russian military isn't planning on completely phasing out the AK-74.

Brace yourselves: It looks like Kalashnikov Concern, the weapons manufacturer behind the iconic AK-47, will end up arming the modern Russian warfighter for future conflicts with a brand new addition to its AK family of assault rifles by the end of 2017, Army Recognition reports.

For the last few years, the Russian government has been slowly developing a cutting-edge combat system for its military’s special forces. Dubbed “Ratnik” (Russian for “warrior”), the program currently boasts all the futuristic goodies of the gadget-heavy systems you might see in a science-fiction movie: Modernized body armor, bulletproof shields, an onboard tactical computer, and a helmet festooned with night-vision and thermal imaging gear — all of which have seen testing as recently as October 2016.

But what the Ratnik program doesn’t have just yet is an assault rifle of choice, the modern update to the Russian military’s standard issue AK-74 that can match the U.S. Army’s standard-issue M4 carbine on the battlefield — and that's where Kalashnikov Concern comes in.

The Russian military is currently testing automatic rifles from two producers to supply the Ratnik program by the end of 2017: the A545 and A762 rifles designed at Kovrov Mechanical Works’ infamous Degtyarev weapons plant, and Kalashnikov’s AK-12 (for 5.45mm ammo) and its AK-15 variant (for 7.62mm ammo).

To be fair, the AK-12 has been in development since 2011, but the rifle that Kalashnikov unveiled at the"ARMY-2017" International Miltary-Technical Forum in Moscow in the fall of 2016 reportedly “had nothing in common” with the submachine gun the company had touted to officials for years, according to Army Recognition: It doesn’t even share any interchangeable parts.

The new AK-12, based on the company’s AK-400 prototype, reportedly addresses previous concerns around full automatic fire and production costs while improving on some of the more desirable features of the previous model. Modern Firearms has an excellent breakdown of the rifle’s specs:

AK-12 (AK-15) rifle is equipped with integrated Picatinny rail on the top of the redesigned, detachable top cover, which permits simple and fast installation of modern day and night sighting equipment. Bottom of the forend is also equipped with Picatinny rail for various tactical accessories such as vertical grips, flashlights and lasers. Rifle is equipped with side-folding shoulder stock which is adjustable for length of pull. Iron sights consist of a shrouded front post, mounted on the gas block, and an adjustable rear aperture sight, installed on the removable base using upper Picatinny rail. Barrel is provided with effective compensator / muzzle brake. Depending on the tactical situation, a bayonet or quick detachable sound suppressor can be mounted on the barrel. To further increase combat effectiveness of the rifle, it can be equipped with 40mm underballer grenade launcher such as GP-25 or GP-34.

To be clear, the Russian military isn't planning on completely phasing out the AK-74. "The experience of all wars shows that the main requirement is reliability," military expert Viktor Murakhovsky told Army Recognition. "[The] AK-74 is a very successful design but it needs modernization. It is necessary to considerably improve combat engagement convenience, including ergonomics, and provide a possibility to mount additional devices."

The only competition the AK-12 currently faces, the Kovrov A545 and A762, are nothing to sneeze at, designed to decrease movement during firing and increase burst accuracy by up to 20% over the current AK-74. And it’s possible that the Russian military will end up adopting both: deputy prime minister Dmitry Rogozin told Interfax in March that the military would consider adopting both rifles after the conclusion of field tests.

But given the near-unbeatable production systems of Kalashnikov Concern, the company’s highly public reputation for reliability, and the existing supply of the ubiquitous AK family of rifles available for modernization, one thing seems certain: the Russian soldiers of the future will race into battle with a Kalashnikov at the ready.