Al Qaeda Is Rising Again, and No One Seems to Give a Damn 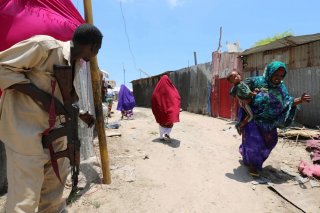 Al-Qaeda is rising again, and no one seems to care.

A recent UN report confirms that al-Qaeda is getting stronger and actively plotting with the Taliban while waiting for the US to leave Afghanistan. In Africa, the terror group’s affiliates lead insurgencies while launching terror attacks into neighboring states. The attack on a Kenyan base that killed three Americans is an example. Within the past six months, an al-Qaeda attack planned through its Yemeni branch killed three sailors on US soil last December in Pensacola, Florida, and subsequently inspired a copy-cat attack on the Corpus Christi naval base in Texas. American acquiescence to al-Qaeda’s return plays directly into its hands.

Afghanistan will soon be a place where the mujahideen defeated the Soviets and the US. Al-Qaeda never assumed that it would win militarily. Instead, it waited for the US to tire of the fight and retreat. The late al-Qaeda founder, Osama bin Laden, predicted the US withdrawal. Ten years ago, he taunted: “Can American continue war with us for several decades?” The answer, apparently, was only for one more decade. The US has accelerated its withdrawal of troops from Afghanistan even beyond the terms of the peace deal with the Taliban, prompting talks now of NATO’s accelerated exit. Throughout the Afghanistan war, US forces have focused on combating al-Qaeda, the Taliban, and more recently the Islamic State. America’s retreat will result in the loss of a “critical platform” needed by the US to deploy its unique capabilities against these enemies.

Counterterrorism pressure worked to weaken al-Qaeda’s ability to direct terror attacks from Afghanistan. US drone strikes — and the occasional raid — picking off top leaders in Afghanistan disrupted operations by eliminating operatives and their knowledge, while creating burdensome operational security requirements that slowed communication. Reducing the number and range of US advisers deployed with Afghan forces eased that pressure and allowed al-Qaeda to reestablish training camps in Afghanistan. It is nonsensical to believe that the Taliban, which adheres to the same ideology as al-Qaeda, will exert any pressure on al-Qaeda, whose leaders have been consultants to the peace process. Al-Qaeda has been preparing for this exact retreat for years.

Al-Qaeda’s branches in Somalia and the Sahel could likewise face less counterterrorism pressure in the coming years. Reports surfacing from the Pentagon indicate the possible removal of US support to French counterterrorism operations in the Sahel. Al-Qaeda expanded there over the past few years despite French operations, though its direct threat to American lives is limited due to the distance between its sanctuaries and regional capitals. In Somalia, an African Union peacekeeping force involved in ground counterterrorism operations is supposed to transfer responsibility to Somali forces in 2021, even though these forces remain incapable of holding terrain. Though US pressure on al Shabaab has increased, the group is now seeking capabilities to kill Americans outside of Somalia.

Policymakers would be smart not to dismiss al-Qaeda’s growth in far-flung corners of the world despite the fact that al-Qaeda has killed relatively few Americans since 9/11. The Obama administration’s decision to ignore al-Qaeda’s “jay-vee team” in Iraq turned out to be costly in both dollars and American lives. Until recently, the Islamic State’s threat eclipsed that of al-Qaeda because it directed and inspired attacks in the West. Today, as Americans and their partners turn away from offensive operations, both the Islamic State and al-Qaeda are reconstituting on the battlefield. Both mean to inspire attacks. Add growing concerns over the al-Qaeda threat from Syria, and the terror organization no longer seems like such old news.

Recognizing al-Qaeda’s renewed and future threat does not mean that the US must again prioritize counterterrorism over all else. That would be a mistake. Instead, a smart US approach contesting Chinese and Russian influence in Africa, the Middle East, and South Asia should simultaneously counter the terrorism threat. The same conditions that favor China and Russia also favor these groups: bad governance, deteriorating security conditions, and growing authoritarianism. Focusing American power — hard and soft — on shaping local conditions should close out the space to US adversaries, countering the influence of both maligned and transnational actors.

Learn more: Al Qaeda's role in the Pensacola shooting and what it means | The Yemen war at 5 years | Congratulations, Baghdadi is dead. But we're no closer to victory in the 'forever war.'

This article by Katherine Zimmerman first appeared in AEIdeas on June 4, 2020.

Image: A Somali soldier holds position as civilians evacuate from the scene of a suicide explosion after al-Shabaab militia stormed a government building in Mogadishu, Somalia March 23, 2019. REUTERS/Feisal Omar.