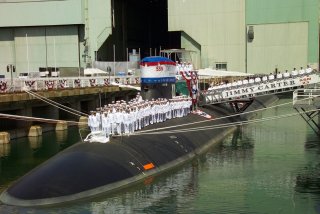 Key Point: According to U.S. Navy tradition, most American Presidents are honored by having an aircraft carrier named after them. Such is the case with the USS Abraham Lincoln, USS Ronald Reagan, USS Gerald Ford and USS George H.W. Bush. However, one American President was honored not with having his name on a U.S. Navy carrier – the largest warships in the world today – but rather on a nuclear submarine.

The USS Jimmy Carter was named in honor of the nation's 39th president, and fittingly because President Carter served on board a submarine after he received his B.S. degree with the United States Naval Academy in 1946. In the Navy, Carter became a submariner, rising to the rank of lieutenant and serving in both the Atlantic and Pacific Fleets.

Carter served on board a number of submarines, mostly electric-diesel, beginning with the USS Pofret. He was chosen by then Captain Hyman Rickover for the nuclear submarine program, and President Carter has said that after his parents, Rickover was the great influence on his life. Assigned to Schenectady, New York, Carter took graduate work at Union College in reactor technology and nuclear physics. He served as senior officer on the pre-commissioning crew of the USS Seawolf, the Navy's second nuclear submarine.

President Carter, who had a promising career in both nuclear propulsion engineering and instruction, resigned his commission in 1953 when his father became ill and passed away. Carter served in the inactive Navy Reserve until 1961, and his awards included the American Campaign Medal, World War II Victory Medal, China Service Medal, and National Defense Service Medal.

It was thus fitting that to honor the former submariner, the third and final Seawolf-class submarine was named USS Jimmy Carter (SSN-23). The Navy had originally developed the class to counter Soviet submarines that were of similar capabilities. General Dynamics Electric Boat was contracted to build a total of 29 of the subs, but with the end of the Cold War and the collapse of the Soviet Union that number was cut back to just three.

SSN-23 became the only submarine to be named for a former President – in this case a living one. The boat was ordered on June 29, 1996 and her keel was laid down on December 5, 1998. The USS Jimmy Carter was launched on May 13, 2004 and commissioned for service the following February 19th with a crew of 15 officers and 129 enlisted.

The boat displaces 12,140 tons under full load and is 453 feet in length with a beam that measures 40 feet. Power is supplied from a single S6W series reactor, which provides an unlimited ocean-going range. She has an underwater speed in excess of 25 knots.

The motto of the USS Jimmy Carter is "Semper Optima" ("Always the Best").