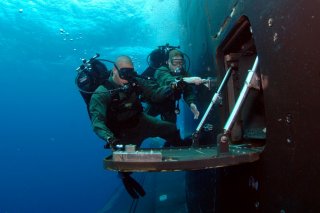 Since Operation Neptune’s Spear, the raid that killed Osama bin Laden in 2011, the American public and the world at large is quite familiar with the U.S. Navy’s SEAL teams. An avalanche of books, television shows, podcasts, and even films—some starring active-duty Navy SEALs and sanctioned by the Navy—have propelled the SEAL community to the very top of the public consciousness.

The Navy SEAL Teams are the U.S. Special Operations Command’s (SOCOM) go-to choice for maritime special operations. They specialize in direct action, special reconnaissance, and underwater unconventional warfare and can infiltrate and operate from the sea, air, and land.

But despite the widespread popularity of the SEALs, not many know about the humble beginnings of the community during the early, bleak years of World War II. Then, there were no Navy SEALs but rather the frogmen of America’s Underwater Demolition Teams (UDTs).

When the Japanese attacks on Pearl Harbor and the Pacific pulled America into the chaos of World War II, the U.S. Navy and Marine Corps didn’t have a dedicated beach-clearing and reconnaissance unit.

A lot of things have to happen before an amphibious landing can take place. The tides, underwater obstacles, and density of the sand were just some of the environmental aspects that commanders needed intelligence on to plan amphibious operations. Could the sand on the beaches of Saipan hold American tanks, or would they get bogged down? Were the beaches of Okinawa rigged with explosives or obstacles to prevent the amphibious vehicles from approaching? A Marine or Soldier laden with gear could easily drown within meters from the beach. So, understanding the operational environment was critical.

The need for such a capability became increasingly evident as the Navy and Marines began the island-hopping campaign across the Pacific. But it was the Battle of Tarawa in 1943 that bloodily opened the eyes of the Pentagon.

Non-existent reconnaissance of the beaches resulted in the landing Marines getting pinned down on the beaches. Landing craft couldn’t approach the beachhead, and Marines had to wade through both seawater and murderous Japanese fire as they went. In the three days that the battle lasted, over 1,000 Marines were killed and more than 2,000 were wounded in one of the costliest actions in the Corps’ history.

The Pentagon got the message and ordered the establishment of several underwater special operations units, such as the Underwater Demolition Teams, Amphibious Scouts and Raiders, the Special Mission Naval Demolition Unit, the Underwater Demolition Project, and the Naval Combat Demolition Units. Although different, despite very similar names, these units shared many skill and mission sets, and the fact that there were so many of them has more to do with a less organized, war-time military than with competing goals between the units.

The Navy chose Draper Kauffman, the son of an admiral, to create the UDT School and training regime.

Kauffman is one of those characters in history who brim with energy and vision: men and women who could achieve anything they set their mind on, and who change the world around them through sheer determination and grit.

Kauffman graduated from the Naval Academy in 1933 but didn’t receive a commission because Navy doctors thought he had poor eyesight. Determined to prove the bureaucracy wrong, he went to France as an ambulance driver just as the Nazis were invading in 1940. Following the fall of France, he was captured by the Germans and held as a prisoner for two months before being released and going to Britain, where he joined the Royal Navy, diffusing bombs and mines dropped by the German air force, known as the Luftwaffe, during the Battle of Britain.

He proved his point, and the Navy recalled him to active duty shortly before the attacks on Pearl Harbor. Upon hearing of the devasting Japanese attacks on the American Pacific fleet, Kauffman went straight to Hawaii, where he personally diffused a Japanese 500lb bomb that hadn’t exploded so the scientists of the Bureau of Ordnance of the Navy Department could study it.

For this action, he received the Navy Cross, the second-highest award for valor. Later, Kauffman would receive a second Navy Cross for leading a daring daylight reconnaissance mission under heavy Japanese fire.

When Kauffman got the order to establish a UDT school, he went across the fleet in search of volunteers for the new specialty. Several officers from Reserve Officer Training Programs (ROTC) raised their hand, as did many Seabees, or members of the Naval construction forces who were accustomed to operating in active combat environments.

Then the training began. Kauffman envisioned an elite special operations unit, and the training reflected that vision. Small-boat operations, swimming, explosives, small-arms, and hydrographic charting were some of the topics the volunteers focused on, with physical training being a staple throughout the course. Top physical condition was a must, given the extremely arduous missions that the frogmen would be called upon to complete.

The training regime culminated with an evolution that today is known as “Hell Week.” It was a non-stop 7-day event (nowadays, Hell Week is usually five-and-a-half days) full of physical activities meant to push candidates to their absolute limits to see who can still perform when tired and cold beyond comprehension. Only 25% to 35% of those who began training made it through to the end.

The Navy soon deployed these units for the first time in large numbers in Europe, and shortly after in the Pacific.

Formed in August of 1942, the Special Mission Naval Demolition Unit was created to pull off a single mission, rather than a series of operations as you’d expect of such a specialized unit.

During Operation Torch in North Africa, the American military was planning to land in Morocco, in the east, and link up with the British forces that were coming from Egypt and Libya, in the west, to crush the German and Italian forces in Tunisia, which lies in between. The Special Mission Naval Demolition Unit had to destroy a cabled boom that blocked the Wadi Sebou River, which was connected to the Atlantic Ocean, and allow the destroyer USS Dallas to approach a nearby Axis airbase and cover an Army Ranger operation that was going to take place.

In two nights and under heavy seas and enemy fire, the Navy’s frogmen achieved their goal and enabled the success of the amphibious landings that followed.

A few months afterward, the Allies surrounded the Axis forces in Tunisia and they surrendered. All of the Sailors of the Special Mission Naval Demolition Unit received the Navy Cross for their actions, but the unit disbanded soon afterward.

Another initiative, the Underwater Demolition Project, trained and prepared a small force of Sailors in similar skill sets as the other underwater demolition units. This time, they trained to participate in Operation Huskey, the Allied invasion of Sicily, in 1943.

While Kauffman was setting up the UDT school, the Navy was establishing the Naval Combat Demolition Units, which were composed of one officer and five enlisted Sailors each. These small units were dispersed throughout the fleet in Europe and the Pacific. During Operation Overlord, the D-Day landings in France in 1944, Naval Combat Demolition Units played a pivotal role in securing the beach.

Augmented by a few Seabees, each Naval Combat Demolition Unit was assigned to clear a portion of the Omaha and Utah landing beaches. In the pre-dawn hours, shortly before the main landings, these frogmen started working in the frigid waters, clearing obstacles with explosives. The heavy German resistance, especially in Omaha, imposed a heavy cost, killing or wounding over 100 frogmen throughout the effort, resulting in a 52% casualty rate. June 6, 1944 is still the deadliest day in the history of Naval Special Warfare. Every Naval Combat Demolition Unit that fought at Omaha received the Presidential Unit Citation—an honor matched by only two other units on D-Day—while the frogmen at Utah received the Navy Unit Commendation, the only awarded on that day.

The Naval Combat Demolition Units then went on to participate in the amphibious landings in the south of France, Operations Anvil and Dragoon, in August 1944 again distinguishing themselves for their bravery and effectiveness in their role.

The Underwater Demolition Teams—the ones who survived after the war and the closest direct ancestors of the Navy SEAL Teams—were much larger than the previously mentioned units. With approximately 15 officers and 70 enlisted, each UDT was closer to a company-strong unit than the other, smaller Naval special operations units.

The UDTs first saw action in the Marshall Islands in 1944, followed by the invasion of the Mariana Islands (Saipan, Tinian, Guam) in June of the same year. The UDT’s frogmen conducted hydrographic reconnaissance and cleared the shallows and beaches, enabling the successful capturing of the islands. Their next and biggest challenge came during the Battle of Okinawa, where close to 1,000 UDT frogmen worked in the frigid Pacific waters to ensure that the Marines could land safely. After the fall of Iwo Jima and the atomic bombs in Hiroshima and Nagasaki forced Japan to surrender, UDT frogmen were the first Americans to reach the Japanese home islands and receive the surrender of a Japanese unit.