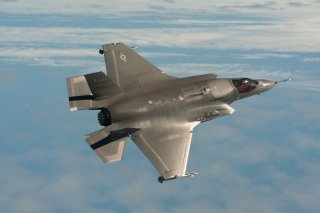 Very little or even next-to-nothing is known about the mysterious, yet perhaps quite promising prototype sixth-generation stealth fighter which has exploded onto the scene and taken off into the air years ahead of schedule. Yet there is little doubt that it may be faster, stealthier, more maneuverable and lethal than anything the world has ever seen.

How did a sixth-generation fighter demonstrator take to the sky many years, if not an entire decade, earlier than expected?

There are likely many reasons for this, a major one being the emergence and success of digital engineering, a computer simulation process through which weapons performance, design specs and sensor fidelity and other variables of critical importance to modern warfare can be tested, analyzed, refined and accurately evaluated.

A lesser emphasized, or certainly less visible, attribute of the new platform likely to bring a defining margin of difference to air combat is sensors, radio frequency (RF) technology, artificial intelligence (AI)-enabled data analyzing, digital processing speed and various kinds of electronics. Information itself, considered its own weapon of war, is being processed, analyzed and distributed much faster and more differently than ever before in the history of combat. It is therefore likely that the elements of technological superiority expected to characterize new generations of stealth fighter technology will be found in the areas associated with RF, precision targeting and range dynamics, AI-empowered digital processing, sensor systems and the intersection or connectivity between them.

The Pentagon, academia, defense industry giants such as Raytheon Intelligence & Space’s Advanced Concepts and Technology unit and the Defense Advanced Research Projects Agency (DARPA) are all deeply immersed in exploring new dimensions of digital engineering, many of which are RF related applications being explored for sixth-generation fighters.

Some of the building blocks of these technologies pertain to what’s called mixed-mode electronics, a process through which RF is integrated into digital circuits onto a single chip for processing, a DARPA essay explains.

These future technologies, being worked on by DARPA, the Pentagon and some of its large industry partners such as Raytheon, intersects with ongoing efforts to advance new paradigms for digital engineering which not only replicate technical performance through computer simulations but also explore the boundaries of RF-generated sensing, avionics and electronics.

“We’re developing the frameworks and processes and applying them across the company to accelerate development across the board,” Fitzgerald said.