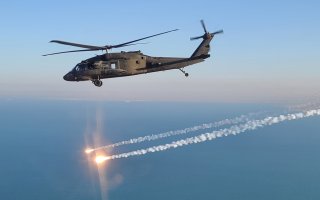 Here's What You Need To Remember: The UH-60 airframe will continue to serve until the early 2030s, when it will be replaced by the Joint Multi-Role Medium helicopter, part of the U.S. Armed Forces’ Future Vertical Lift Program.

The U.S. Army’s primary medium-lift helicopter was the result of lessons learned by the Army during the Vietnam War. While war in Southeast Asia validated the usefulness of helicopters in modern warfare, high helicopter and personnel losses led to a demand for a faster, better armored rotary-wing transport aircraft. The result was the now-iconic UH-60 “Black Hawk” helicopter.

The American involvement in Vietnam was the first large-scale use of helicopters to move troops and equipment on the battlefield. While helicopters were used in the Korean War and the French war in Algeria, U.S. forces used helicopters extensively in Vietnam. Units such as the Army’s First Cavalry Division and 101st Airborne Division, along with Marine Corps units, conducted large, battalion-level troop movements with helicopters across South Vietnam to catch Viet Cong and North Vietnamese Army units off-balance. Special forces units also used helicopters to insert far behind enemy lines as far as Laos and Cambodia.

This heavy use of helicopters came at a high cost: of the 11,827 helicopters that served in Vietnam, 5,086 were shot down in action. The most popular helicopter of the war, the UH-1 Iroquois medium transport helicopter, suffered 3,305 aircraft out of 7,103 helicopters deployed to Vietnam shot down or crashed. 2,709 passengers and aircrew were killed in UH-1 crashes.

After the Vietnam War the Army continued to invest heavily in helicopters. Shifting back to the prospect of high-intensity combat against legions of Soviet tanks, the Army experimented with the so-called TRICAP division concept, which saw the First Cavalry Division reorganized with two mechanized infantry/armored brigades and a third brigade consisting of two battalions of attack helicopters and a third battalion of airmobile infantry. While the concept proved a failure, it did endear the Army to the concept of making all of its divisions airmobile-capable, and each was assigned an entire aviation brigade of transport and attack helicopters.

One problem: if helicopters sustained nearly 50 percent losses against lightly armed Vietnamese opponents, they would be practically murdered by Soviet and Warsaw Pact troops sporting the latest air defenses, particularly shoulder-fired surface-to-air missiles. The Army was going to need a new helicopter with the speed to cross the battlefield quickly and the protection to keep it from being shot down. In January 1972, Boeing-Vertol and Sikorsky were awarded contracts to for design and production of prototypes, and the Sikorsky model won the competition in December 1976. The UH-60A “Black Hawk” helicopter officially entered service in 1979.

The Black Hawk was designed to be faster and carry more troops than the UH-1. Equipped with two General Electric T700 turbine engines, the UH-60A helicopter had a cruising speed of 139 knots, thirty knots faster than the UH-1. It had a maximum internal load of 2,460 pounds or eleven fully loaded infantrymen, and could operate in worse weather than the UH-1. A follow-on version, the UH-60L, increased cruising speed to 150 knots; the newer UH-60M is slightly faster, at 154 knots.

The UH-60 was also armored against enemy air-defense threats. The pilot and copilot sit in armor protected seats. The helicopter’s rotors were designed with titanium cores to resist enemy fire up to twenty-three-millimeter, and the aircraft is equipped with pressurized sensors capable of detecting damage to rotor pressurization. This gave it a fighting chance against the ZSU-23-4 “Shilka” mobile air-defense system, which utilized four twenty-three-millimeter guns controlled by radar. For defense against missile threats each is equipped with the AN/APR-39(V)1 radar-warning receiver and the AN/ALQ-144 infrared countermeasures system and chaff/flare dispenser.

Black Hawk helicopters first saw action in the invasion of Grenada in 1983, followed by the invasion of Panama in 1989. The UH-60 saw extensive use in the 1991 Gulf War and the 1994–95 humanitarian mission in Somalia, where they participated in the famous “Black Hawk Down” raid and ensuing battle. In the post-9/11 period, Black Hawks have operated extensively in both Iraq and Afghanistan.

In 2011 it was revealed that highly modified UH-60s had participated in the raid to kill Osama bin Laden. The Black Hawks are believed to incorporate a low-noise blade configuration, antiradar paint coatings, treated windshields and several hundred pounds of modifications to the aircraft’s physical shape to make it less visible to radar. At least one modified Black Hawk participated in the raid, and was destroyed by U.S. forces after suffering a hard landing.

The UH-60 airframe will continue to serve until the early 2030s, when it will be replaced by the Joint Multi-Role Medium helicopter, part of the U.S. Armed Forces’ Future Vertical Lift Program. The two primary candidates are the Sikorsky-Boeing SB-1 Defiant and the Bell V-280 Valor tilt-rotor. Whichever aircraft wins, the UH-60 is guaranteed to be replaced with a bold new design that reaches new heights in speed and performance. In the meantime, the Army is preparing to field the new UH-60V which upgrades older helicopters with an all-digital cockpit. The UH-60’s design, influenced by the battlefields of Vietnam, will almost certainly fly in one form or another for a half century—or more.