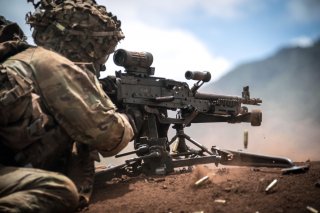 Here's What You Need to Know: The Browning M2 heavy machine gun—“Ma Deuce” or “50-cal” to the troops—casts a long shadow over U.S. military history.

When Lauren Bacall Wellington served during the Iraq War, the former Army sergeant and combat medic did more than treat the wounded.

Wellington spent her 13-month deployment from 2007 to 2008 with the 1st Cavalry Division at Forward Operating Bases Falcon—just south of Baghdad—and Prosperity, in Baghdad’s Green Zone.

She often pulled guard duty at the main gate with a Browning M2 .50-caliber machine gun, looking out for suicide car bombs.

Does the classic weapon look intimidating? “It does when I am behind it,” Wellington said. “It’s a huge machine gun with a lot of power. If I had a choice between running toward a 50-cal or toward the zombies, I would run toward the zombies.”

The Browning M2 heavy machine gun—“Ma Deuce” or “50-cal” to the troops—casts a long shadow over U.S. military history.

A wounded Audie Murphy, one of America’s most decorated soldiers, fired one from atop a burning tank destroyer and held off six tanks and 250 German soldiers for more than hour during a battle in eastern France, an act of bravery that won him the Medal of Honor.

In 2003, Army Sgt. 1st Class Paul Ray Smith repeated Murphy’s feat by climbing on top of an armored vehicle and firing a 50-cal at more than 100 enemy soldiers that had pinned down his platoon.

Smith died in the firefight, so his Medal of Honor was posthumous.

The M2 has been in production since 1933—the longest service record of any weapon in the U.S. inventory, according to Gordon Rottman, author of Browning .50-Caliber Machine Guns. Its sheer firepower and reliability ensure that the Ma Deuce will be around for years to come.

“Witnessing the down-range effects of the .50-caliber bullet is an eye-opening experience,” writes Rottman in the definitive guide to the gun. “There are few who can say they were wounded by a .50-cal. Those hit seldom say much more.”

In World War I, both the French and British possessed large-caliber machine guns like the Hotchkiss, but American machine guns only fired rifle-size calibers. American Expeditionary Force commander Gen. John Pershing believed that the Army needed a heavy machine gun to maintain parity with rival forces.

After Browning’s death, other weapons designers corrected flaws in the M1921 such as its lightweight barrel. During the 1930s, the Colt Company took over production of the weapon—but it still essentially was Browning’s original design. The Army designated it the Browning M2.

The classic configuration of the Ma Deuce is a belt-fed, air-cooled, recoil-operated machine gun. It’s nearly six feet long and weighs 84 pounds without its tripod—and 128 pounds with.

It fires up to 550 rounds per minute, but it also can fire single shots. The ammo belt can feed in from the right or left after a few adjustments to the gun.

The weapon’s effective range is 6,000 feet, but its maximum range is four miles.

Both the Army and the Navy loved the M2 and by World War II it was everywhere. Tanks carried it atop their turrets, bombers packed several for defending against enemy fighters and GIs and Marines mounted it on a tripod for laying down suppressive fire. Navy warships carried it to shoot down attacking planes.

There was a version that the troops nicknamed “the Kraut Mower.” Originally designed as an anti-aircraft weapon, the M-45 Quadmount clustered four Ma Deuces in an armored housing on the back of a halftrack.

Soldiers discovered that the M2 was a hellishly effective anti-personnel weapon. A barrage of .50-caliber rounds simply would mow down a German position.

The long-range firepower of the Ma Deuce combined with its single-shot ability convinced legendary Marine Corps sniper Carlos Hathcock he had an unusual but effective weapon.

In 1967, Hathcock mounted a 10-power scope on an M2 and killed a Viet Cong fighter from 2,500 yards away—a nearly one-and-a-half mile shot that remained the world record for longest sniper kill until 2002.

The M2 has its weaknesses. If the barrel overheats you have to install a new one. Install the new barrel incorrectly and the gun will malfunction violently.

M-2 malfunctions resulting from improper barrel changes injured dozens of soldiers in Iraq and Afghanistan before the Pentagon approved a “quick change” kit in 2012 that allows a barrel replacement without manually resetting the weapon, according to a Department of Defense report for Congress.

Its weight and tendency to vibrate the gunner’s body can make it awkward to use. But it’s a powerful weapon that can dominate any battlefield.

“It is a great weapon for protecting FOBs or stationary objects or for putting on a vehicle,” Wellington told War is Boring. “The sound alone makes people duck.”

This article originally appeared on War is Boring. This article is being republished due to reader interest.