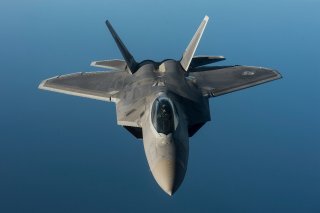 Despite the Air Force’s intention to retire the Raptor within the coming decade, the aircraft is expected to remain in service until its replacement—the Next Generation Air Dominance fighter—comes online. As a result, updates, and upgrades are still underway for America’s F-22 fleet—some of which are intended to offer a bridge between the Raptor and the NGAD fighter to come.

In April 2022, we got a glimpse at what some of these upgrades will entail, thanks to social media posts from U.S. Air Force’s Air Combat Command’s General Mark Kelly, and the branch’s 2023 budget request. Among them were new stealthy underwing fuel tanks and associated pylons, missiles, and what could be new electronic warfare or infrared search-and-track (IRST) pods.

Stealth fighters like the Raptor are designed to fly without any external munitions or fuel tanks when maintaining a stealth profile. Yet, fighting over the sprawling expanses of the Pacific (for example) would demand that the Raptor carry more fuel than its internal stores allow. Today, the Raptor has 600-gallon fuel tanks it can carry underwing, but these tanks reduce its observability to a degree. The new fuel tanks intended for the F-22 are meant to offset some of that reduction.

The Warzone posted excerpts from the budget request that provide more details:

“Due to the advancement of adversary technologies in detection and emergence of fighter, cargo, and refueling platforms increasing engagement ranges, it is critical to future mission execution and success to provide the Raptor with an increased range capability while maintaining own-ship survivability.“

The upgraded fuel tanks, listed in the Air Force’s budget request as the F-22 Low Drag Tank and Pylon (LDTP) capability, aim to replace the previous tanks and the pylons with a new, stealthier design. This will allow the Raptor to fly further without giving itself away. Importantly, they’re designed to eject from the wing and leave a smooth surface behind, which is vital for maintaining stealth.

A separate set of underwing pods were also featured in the image shared by Gen. Kelly that many have asserted may house a new electronic warfare suite or perhaps the Raptor’s long-awaited IRST capability.

Infrared Search and Track, or IRST, is a passive means of detecting and targeting enemy aircraft and is among the most effective ways of engaging radar-wicking stealth fighters. As the name suggests, IRST systems identify heat signatures, which allows a stealth fighter like the Raptor to hunt for enemy jets without broadcasting radar waves that would announce its presence. It also allows a fighter to lock onto stealth targets via the heat of their exhaust.

Finally, a new missile that could represent the forthcoming (and quite secretive) AIM-260 long-range radar-guided air-to-air missile is also shown, demonstrating the Raptor’s ever-growing suite of Beyond Visual Range (BVR) weapon systems.