America’s Success in the Gulf War Forever Changed the World 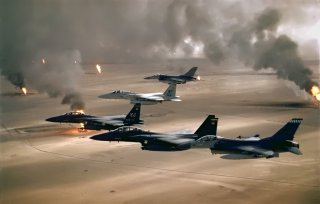 Here’s What You Need to Remember: Few believe that the United States will fight anything like the Gulf War in the near future, and that’s in part because aggressors have become cagier about how they decide to fight. But it’s undoubtedly a good thing that most combatants struggle to keep their fights below the level that would trigger international, and U.S., intervention.