With America, Compromise Is Possible Between Russia and Ukraine 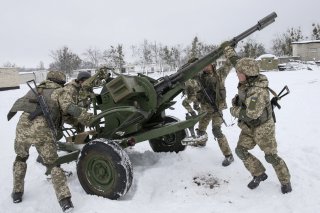 Here's What You Need to Remember: A first additional step in the spiral would be for Ukraine to affirm the existence of humanitarian corridors in all directions for the population in the Donbass region. Russias could reciprocate that step by confirming and also expanding the role of OSCE monitors across the conflict region to assess humanitarian needs and aid with ceasefire compliance.

With all the talk of Ukraine in the American press over the last six months, one would think that at least a few peace plans might be seriously debated. No such thing. Western journalists and opinion leaders are in no mood for peace and reconciliation. It wasn’t the Steinmeyer Formula or the Minsk Agreement that kept coming up at the recent hearings on Capitol Hill, but rather the Javelin missiles, of course. The main concern in the West was that Ukrainian president Volodymyr Zelensky might appear weak in the 9 December meeting with President Vladimir Putin of Russia or even could “capitulate” completely.

In that respect, the Western media seemed to be channeling the zeitgeist from Kyiv, where crowds were apparently on call, lest the comedian turned president of Ukraine not show adequate spine. Led by the defeated incumbent Petro Poroshenko, protesters were perhaps poised for Maidan 2.0 if that proved necessary. Fortunately, it did not, and all the journalists could go back to writing about various conspiracies, whether Rudolph Guliani’s most recent visit to Kyiv or the latest murder spectacle. Peace negotiations – what a quaint and silly idea. Why even bother?

Measured as a meeting that aired grievances candidly and got both sides rather red in the face, the Paris Summit in the Normandy format (with Ukraine, Russia, France and Germany all represented) seems to have succeeded. A writer in the Kyiv Post channeled a rather smug “told you so” attitude immediately after this first Zelensky-Putin encounter, explaining that the possibility of genuine peace in the Donbass is simply up to the Russian president, “But it appears that he does not want to” make peace. The author explains: “Zelensky returned to Kyiv with what many saw as no victory and no loss, ‘a draw’ … The reaction in Ukraine seems to be that the political newcomer, president since May, did what he could — neither capitulating nor delivering a breakthrough.” This Ukrainian reporter does admit that the prisoner swaps, along with the pull back of troops from the front line, as well as the new crossing points for civilians do amount to something achieved. But the article also notes that sparks flew aplenty over the issue of Ukrainian control of the border between Donbass and Russia, and concludes by quoting a Brussels specialist, who observes that Putin’s goal is “is to keep Ukraine in trouble and himself in power.”

The single substantial analysis to run in the New York Times after the summit did not highlight any of the progress outlined above, but predictably focused on the negative. There were the usual tropes about “appeasement,” of course. The Russian president is said by these DC establishment “experts” to require a war to keep himself in power, and that the Kremlin will “never abide a stable, prosperous … Ukraine.” These authors bemoan increasing “Ukraine fatigue” in the West, as if only more military aid for Kyiv will bring about peace. Most galling is the critique of the actual peacemakers: both French president Emmanuel Macron and German chancellor Angela Merkel, who are derided as arrogant and also naïve for striving to end the war. This follows an infuriating pattern of Americans pretending that they understand European security better than do Europeans themselves. With irretrievably hawkish establishment foreign policy views like these predominating in DC and flourishing in the American press, no wonder U.S.-European relations are in a deep crisis.

And that hostile feeling is generally reciprocated in Moscow, logically enough. One Russian perspective on the discordant meeting in Paris was that the war will be dramatically intensified by the United States and its allies, which are said to be intending to declare the Donbass “militias to be ‘terrorist groups’ and our country their ‘sponsor’ [ополченцев Республик ‘террористическими группировками,’ а нашу страну – их ‘спонсором’], concluding that the Donbass militias will then be “destroyed.” Another Russian article appearing after the summit said that Kyiv is preparing to resolve the Donbass issue by force, so “Donbass veterans are ready to fight back against NATO ‘peacekeepers.’ [Ветераны Донбасса готовы дать отпор ‘миротворцам’ НАТО].” A slightly less hawkish appraisal appeared under the headline “The War in Donbass is not stopped,” wherein the author asks incredulously “What can be achieved in a situation, when Kyiv is basically not ready to make compromises [Что можно успеть … в обстановке, когда Киев принципиально не готов к компромиссам]?” A common theme, echoing Putin’s agitated responses, was the frustration that Zelensky was walking back the progress from previous rounds of negotiations, known as the Minsk Accords. Interestingly, and quite contrary to conventional Western assessment of the Russian press as state-controlled, one Russian headline appeared that excoriated Putin for his supposedly “quiet capitulation,” before the Ukrainians. The Russian author charged: “Our leadership has chosen the policy of ‘appeasement.’ [наше руководство выбрало политику ‘умиротворения’].”

Still, for all the pessimism and bitterness flowing out of the volatile Donbass issue these days, is a resolution actually so far out of reach? Do Western experts and journalists take any interest at all in possible solutions to the conflict or are they too busy tracking down evidence of Russian influence in their constant discharge of McCarthyist twaddle? If American diplomats put even a quarter of the effort they have made at shafting their own president toward finding a diplomatic solution to the Ukraine conundrum, Europe might actually be able to live in peace for the next century.

In the interest of such a peace (and also brevity), I will outline such a conflict resolution plan below. In effect, both sides have already inaugurated a “cooperation spiral” with Ukrainian troops having pulled back from several positions, while Russia has now apparently agreed to continue gas transit through Ukraine (a major part of the Ukrainian national budget) for an extended period. A first additional step in the spiral would be for Ukraine to affirm the existence of humanitarian corridors in all directions for the population in the Donbass region. Russias could reciprocate that step by confirming and also expanding the role of OSCE monitors across the conflict region to assess humanitarian needs and aid with ceasefire compliance.

The second step would be the hardest and most important leap, but is still quite conceivable. Both sides have, more or less, agreed that UN peacekeepers or “blue helmets” are a vital part of the solution. It’s absolutely true, but heretofore the discussion has generally concerned peacekeepers from Europe and therein is the problem. Instead of NATO or OSCE peacekeepers, Kyiv would have to agree to non-European soldiers to fill the vital role as blue helmets in this conflict. The most promising candidates are China, Japan, South Korea and India for this important role. Ideally, one pro-Western country (e.g. India or Japan) would be paired with one pro-Russian country (e.g. China) and the mission might be commanded by a senior officer from an agreed upon post-Soviet nation familiar with the requisite challenges, such as one from Kazakhstan--a country that has stepped into the mediator role before. Moscow could reciprocate Kyiv’s new flexibility on welcoming non-European peacekeepers by making the hard decision to retract the Mink Agreement’s stipulation on Ukrainian constitutional reform over the special status of Donbass – a process that is not realistic for the foreseeable future given the political complexities and intrigues now pervasive in Kyiv.

After these vital steps are taken and the “blue helmets” are in place (perhaps 25,000), the rest of the steps should not be so difficult. With Donbass autonomy now assured by external (UN) forces, Moscow could maintain the momentum of the cooperation spiral by taking the third step of extensively drawing down and pulling back heavy military forces (armor, artillery and aviation chiefly) from Russian territorial zones proximate to the Donbass. In return, Kyiv would offer its blessing to local elections in Donbass, overseen by both the blue helmets as well as the OSCE monitors. A much harder fourth step for Kyiv would be the acceptance of a low-key “dual citizen” regime that allows Donbass residents to quite easily hold Russian passports. As it turns out, such arrangements are quite common in Europe and across the whole globalizing world. It implies that Donbass citizens will enjoy very substantial freedoms in an increasingly cosmopolitan world with overlapping identities. In return for such acceptance, Russia should make the difficult concession of giving Ukraine full control over its entire border with Russia, including the ultra-sensitive Donbass portion. However, that presence would necessarily entail a border security and customs presence rather than a military presence, logically enough.

As the icing on the cake for finally burying this bloody and dangerous “family quarrel,” Kyiv would take the final step of recognizing Russian sovereignty over Crimea. Yet Kyiv would only take this momentous final step under the condition that Ukraine would be permitted full and unambiguous entry into NATO without Russian objections or countermeasures.  To safeguard such a peace, Ukrainians would naturally be wise enough to keep their shiny, new NATO bases and (appropriately low-key) exercises on the west bank of the Dnieper River.