America Is Four Years Away From Being Outmatched By China 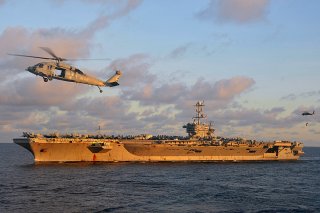 Earlier in March, the top U.S. commanders in the Indo-Pacific and Pentagon officials gave testimony in Congress about the balance of U.S. and Chinese forces in the region.

Although the US military and its allies still have the preponderance of equipment, the future doesn’t look quite as good.

Indeed by 2025, China, according to the US Indo-Pacific Command (INDOPACOM), is expected to militarily outmatch US forces in the region. Some of the numbers that they provided in the House Armed Services Committee hearing are alarming.

For example, by 2025, China is expected to have approximately 100 modern multi-warfare combatant vessels, such as the Type 055 destroyer. Further, by 2025, the Chinese Navy is estimated to have over 60 submarines, 12 amphibious assault ships, and three aircraft carriers.

In comparison, US Navy forces in the region will be able to field only 12 destroyers or cruisers, ten submarines, four amphibious assault ships, and one aircraft carrier.

Admiral Philip Davidson, the commander of the U.S. Indo-Pacific Command (INDOPACOM) said that “absent a convincing deterrent, China will be emboldened to continue to take action to supplant the established rules-based international order, and the values represented in our vision for a free and open Indo Pacific. Our deterrence posture in the Indo Pacific must demonstrate the capability, the capacity and the will to convince Beijing unequivocally, that the costs of achieving their objectives by the use of military force are simply too high.”

To be sure, these are the current and projected U.S. forces in the region but the Pentagon can deploy forces from elsewhere and also rely on local allies and partners who have a vested interest in resisting a Chinese dominance, especially if that dominance is coupled with Beijing’s disregard of the rules-based system that the U.S. has helped to establish in the world after the end of the Second World War.

“As our department’s priority theater, we’re committed to upholding a free and open Indo-Pacific region where all nations, large and small, are secure in their sovereignty, can pursue economic opportunity and resolve disputes without coercion, and can exercise the freedoms of navigation overflight, consistent with an open and stable international order,” David Helvey, the acting assistant secretary of defense for Indo-Pacific security affairs, said in his opening remarks. “It’s an order that places all nations on a level playing field and holds them responsible for preserving the principles that have benefited all of us.”

But China isn’t the only threat in that area of operations. When it comes to North Korea, tensions in the Korean peninsula have been on the decline since 2017. Nonetheless, the regime of Pyongyang still poses a threat not only to the region but to the continental U.S. as well, especially if it manages to create a nuclear ballistic missile that can reach the West Coast.

Army General Robert Abrams, the commander of Combined Forces Command and U.S. Forces Korea, stated that “We have not become complacent when it comes to North Korea,” he said. “We remain clear-eyed about the persistent challenges we face today and in the future. North Korea continues the development of nuclear and advanced missile systems, cyber capability, as well as other conventional and emerging asymmetric military technologies. We will continue to ensure a strong and effective deterrence posture so the North Koreans never misjudge our role, never misjudge our commitment and our capability to respond as an alliance.”

China might be the biggest threat to US national security but it’s also the largest opportunity. Conflict with Beijing isn’t predestined nor necessary. However, a potent US military and strong regional and global partnerships are crucial in deterring China.