America Has Overlooked Nagorno-Karabakh, It’s Time To Get Back In The Ring 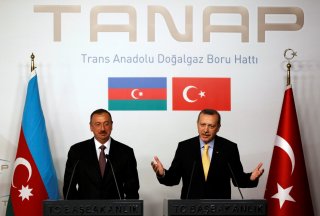 Several Democratic Senators, in the wake of the war in Nagorno-Karabakh, are proposing that the U.S. impose sanctions or terminate all military assistance to Azerbaijan.  Evidently, they blame Baku for the war.  But while such resolutions may gratify the ubiquitous and deep-rooted moralism and desire to punish malefactors that affects the entire U.S. political class as well as interested domestic constituencies; this intemperate and misconceived move actually runs counter to U.S. interests.  Indeed, it would only confirm Azeri and Turkish suspicions that there is no understanding in Washington concerning the Caucasus and thus no reason to pay attention to this gesture of frustration or to anything else coming out of Washington. Neither would it bring the parties to peace, quite the contrary.  That decision would only lead them to seek patrons elsewhere and further estrange them from Washington while depriving the U.S. of leverage in the region.

Since crisis denotes opportunity as well as threat, this war actually behooves Washington to ponder the reasons for this outbreak of fighting as well as the fact that this war offers the U.S. an opportunity to get back in the ring in the Caucasus, advance its own and the belligerents’ real interests, and help bring about peace and legitimate regional order.  First, we must dispute the widespread belief that we have no vital or important interests at stake here other than possibly the safety of energy shipments to Europe from the Caspian that traverse Azerbaijan and Georgia.  In 1993 when this conflict began, Turkey raised the possibility of attacking Armenia to relieve Azerbaijan.  That trial balloon led Boris Yeltsin’s government to warn that any such move risked World War III as Russia would strike at Turkey, a NATO ally, on behalf of Armenia.  Today Turkish President Erdogan’s reckless adventurism both here and elsewhere in provoking Armenia and Russia runs an even greater risk of such a contingency from a much more powerful Russia.  This potential threat alone justifies U.S. involvement as does American membership in the Minsk Group established by the OSCE in 1993 to help foster a negotiated settlement.  Moreover, if the opportunity presented here is correctly grasped, it would enhance American leverage upon Turkey to influence it to curtail its recklessness that has brought it to the brink of war with our other NATO ally Greece, provoked Moscow in Syria, Libya, and now the Caucasus, and other key Middle Eastern actors like Israel and Egypt.

We must also grasp why war has broken out now.  Many, including this author, have predicted that the utter failure of the Minsk Group, composed of the U.S., France, and Russia, to promote negotiations and of Washington take this region seriously would inevitably lead to renewed and much greater fighting with ever more advanced weapons and the real danger of a wider war.  The current threats to strike at Azeri pipelines or at Armenia’s nuclear reactor also highlight just what could be at stake here.  Thus, the present conflict validates these supposedly “alarmist” warnings about the possibility of escalation of this conflict.  Consequently, we must understand the underlying and proximate cause of this war.

From the evidence at hand, the proximate cause could well be Baku's decision with Ankara's support to go to war on September 27, although there are charges of prior Armenian violations of the cease-fire.  But Azerbaijan’s decision occurred in a context that must be understood if we are to bring about first a cease-fire, truce, or armistice, followed by negotiations for a general peace.  Merely achieving a cease-fire, a sufficiently difficult task in and of itself, will only temporarily freeze this war once again, an outcome that, as we have seen, would only lead to even worse fighting in the future.  Many writers on this subject claim that the underlying cause is both sides’ fault in that neither side is willing to negotiate seriously, prepare its people for the sacrifices on both sides that real peace would entail, and instead have inflamed nationalist hysteria to alarming proportions, thereby creating constant domestic pressure on both governments to hold to maximalist negotiating positions.

For all the validity of these assessments, they miss the point that Armenia has deliberately or recklessly compromised its democratic strivings by refusing to negotiate after its democratic revolution in 2018.  If anything, President Pashinyan has proclaimed that Karabakh is Armenia, period.  Yerevan continues to support the "government" in Stepanakert, the capital of Nagorno-Karabakh, and insist that it participate in the negotiations with Baku as an independent actor, a clear non-starter of a proposal.  Armenian officials have told this author that this is the only democratic way to deal with the issue because Nagorno-Karabakh has a democratic right to self-determination.  This disingenuous diplomacy, coupled with Pashinyan and other elite players’ statements to similar effect, meant that Yerevan spurned Baku’s forbearance in 2018-19, where it suspended attacks on Armenia.  Indeed, Azeri officials told this author that Baku had deliberately refrained from commentary on the Armenian revolution precisely to foster an atmosphere conducive to negotiations.  Yerevan's rejection of these signals has convinced the Azeri government that Yerevan has no intention to negotiate.  Officials in Moscow, where Putin is unwilling to send troops that Yerevan wants to defend Nagorno-Karabakh, probably came to similar conclusions.  Obviously, so did Turkey.  And President Erdogan, always looking for opportunities to enhance his domestic standing by fighting abroad for "Turkey's place in the sun," responded by promising military and political assistance.

Therefore, any American diplomatic initiative, which will also, given the parties' intransigence, necessarily continue into the next Administration and thus need to be bipartisan, must address the underlying and proximate causes of this war and deal with Turkey's adventurism.  First, since both sides signed onto the Madrid principles, this outlines the basis for a solution to the issues raised by the original conflict years ago. There is a basis for negotiations now if a mediator or mediators can, as they should, compel the two sides to negotiate.  For this, it is necessary that Washington, along with NATO and the EU, and if possible, Russia, representing not only the Minsk Group but the Transatlantic Alliance as well, use their diplomatic muscle to bring about a cessation of hostilities as soon as possible.  Or in plain English, the prospective mediators should use their leverage to compel the parties to negotiate.   In this context it may also be necessary that NATO remind Turkey that first if Turkey gets into trouble with Russia, it will be on its own, and no Article IV or V of the Washington Treaty will be invoked to save it from the folly of its excessive adventurism.  Second, we should be prepared to emulate President Eisenhower's actions in 1956 to pressure the U.K. and France, i.e., pressure on their current attempts to moderate Turkey's policies.  Turkey's economy is already in highly precarious condition due to Erdogan's incompetent, reckless, and nepotistic policies, so exploiting such leverage is hardly beyond Washington or Brussels' capabilities. It would be a salutary reminder to Erdogan and his supporters that Turkey cannot sustain these neo-Ottoman dreams for all its rhetoric and bravado.

The fact that Azerbaijan has repeatedly proclaimed its limited ambitions and that Armenia ha understands that Baku only seeks to recover its lost territories – for Armenia has not sent its own army into battle – actually makes a cease fire or something like it, given Azerbaijan's gains till now, more plausible an outcome and makes it more likely than if this became a total war.  If unchecked, this could escalate into total war, rendering any negotiating initiatives infinitely more difficult.  Concurrently, and once hostilities have ceased, U.N. or OSCE peacekeepers, enjoying a robust mandate, would enforce that cease-fire or armistice.  At the same time, the parties would commence negotiations with the mediators playing a major role, as, for example, occurred in Camp David between Israel and Egypt in 1979.  Nobody should have any illusions that these processes can be accomplished quickly, but we do have a basis for those talks in the Madrid principles.  These negotiations should lead first to peace that includes the following provisos: the termination of all acts of belligerency between Baku and Yerevan, including Turkey's blockade of Armenia. This would also mean mutual recognition by Baku and Yerevan of each other.  Similarly, the purely Azeri territories captured by Armenia in 1992-93 that are not part of Nagorno-Karabakh would be returned to Azerbaijan, based on the Madrid principles and the negotiations here, the future status of Nagorno-Karabakh would be decided equitably and, if necessary, an internationally supervised referendum or election, e.g., by the OSCE or the U.N., would occur.  In return for whatever outcome emerges out of these talks, we must also understand that the mediators, for the most part, the U.S. and EU or possibly NATO, would have to make substantial "side payments" to compensate both sides for whatever they give up and to allay potential domestic opposition.  We did this at Camp David and such "side payments" are essential to sustaining any peace accord in the context of inflamed nationalist passions in both countries.