America Ignores Mexico’s Narcoterrorist Cartels At Its Own Peril 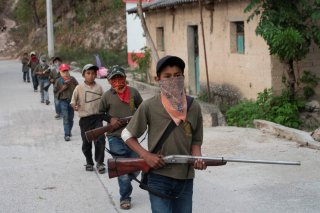 The arrest of Mexico's former Defense Minister, Salvador Cienfuegos Zepeda, on drug trafficking charges, shows once more how far certain "organized crime groups" have penetrated state institutions and how these groups have transformed into transnational terrorist insurgencies that are challenging the entire hemisphere's security.

These groups blur the line between criminality and terrorism, and each day they behave more and more like terrorist insurgencies, in terms of territory controlled, the number of personnel and military equipment possessed, and the actions conducted against the state and its institutions. Locals have also begun to perceive them as alternatives to the government, its institutions, and the rule of law. The challenge is graver still because of the magnitude of political corruption, the weak and underfunded legal systems, the lack of state control over territory, and the policies of appeasement from leaders like President Andres Manuel Lopez Obrador, with their "hugs and not bullets" mantra.

It is no coincidence that the Mexican narcoterrorists have copied Pablo Escobar's objective to attempt to control the territories of their country, both through military means and intimidation and through state capture and corruption. Escobar's extinct Medellin Cartel was only an infant in this development, for the biggest danger comes now from Mexican narcoterrorists due to their sophistication, geographic proximity to the United States and global reach. Unlike ISIS or al Qaeda, which operates in various countries of the Islamic world, the Cártel de Jalisco Nueva Generación (CJNG) has infiltrated itself inside the U.S. and has distribution centers in New York, Chicago, Los Angeles, and Atlanta. Meanwhile, in Mexico, the CJNG has a presence in 24 of the 32 Mexican states and is challenging both the authority of the state and its ability to govern.

In the last few months, the CJNG tried to assassinate Mexico City's Security Chief, Omar Harfuch (who, ironically, has just been linked to the disappearance of the 43 students from Ayotzinapa), and it also perpetrated the assassination of a Federal Judge. In 2019, a Mexican military intelligence source revealed that a meeting had been convened between the major cartels in order to discuss how to decrease the violence in the country, but the CJNG was the only group that was not willing to attend. Like this, the CJNG behaves similarly to ISIS in Syria, which for the most part, refused to negotiate with other militants due to their focus on violence and brutality. Indeed, the CJNG, like the former FARC insurgency with the Antonio Narino Urban Network (RUAN) responsible for Bogota's capital, has created special units to penetrate and destabilize Mexico City.

It is not hard to notice that the narcoterrorists have destabilized Mexico, a country with levels of violence similar to the war-torn nations in the Middle East. If left unchallenged, this violence will spill into the U.S. with heightened intensity over the years. The narcoterrorists have successfully co-opted the state while simultaneously becoming rural players with important bargaining positions. Like in Afghanistan, where warlords obtained special powers and privileges, in Mexico, AMLO released El Chapo's son from custody, and in Colombia, Pablo Escobar was given special treatment by the government in the 80s. In Mexico, the narcoterrorists have engaged in the ethnic cleansing of indigenous communities, whose land is rich in minerals like gold and silver or necessary to cultivate drugs and trafficking routes. Like ISIS or the FARC, their objective has been to appropriate territory for the concentration of power and capital. The barbarism exhibited by ISIS is also imitated by the narcoterrorists who engage in beheadings and mutilations to sow panic towards civilian populations and their adversaries.

Of course, similar to political organizations, the narcoterrorists have engaged in a sticks and carrots policy. During Covid-19, the CJNG distributed groceries in labeled boxes with their group's name in more than 18 localities in Mexico. In the 1980s, Pablo Escobar and the Medellin cartel built houses for the poor. This way, the narcoterrorist engages in social work, resembling government food stamps or social housing, and therefore it tries to build legitimacy and support among populations. Like guerrilla groups who have viewed peasants as important to their revolutions, the so-called Sinaloa Cartel has drawn peasants away from the formal economy and government subsidies. In essence, narcoterrorists have created an absence of local government by using both soft and hard power, leading to a social and political kidnapping of local populations.
But the power of these Mexican organizations has extended all the way to Colombia, where they have taken over the drug business and are spread all over the Andean nation. There are at least 35 cartels in Mexico, and in Colombia, its three most powerful ones, the CJNG, the Zetas, and the Sinaloa Cartel, have a dominating role. Like al Qaeda or ISIS, not every Mexican operative in Colombia belongs to its core group, but rather uses the brand for what it represents.

The demobilization of the FARC created certain power vacuums, which facilitated an invasion of the Mexican narcoterrorists, and as a result, they are now able to skip intermediaries and deal directly with the peasants cultivating the coca. The Mexican narcoterrorists now control the entire process, engage in money laundering, and build laboratories, all in Colombia. They have also turned certain armed groups like a former FARC guerilla group into their own private army and have begun to engage in the regulation of the dynamics of violence in Colombia. The Colombian Attorney General's Office described in 2014 that the Sinaloa cartel had participated in negotiating and establishing a truce between armed groups in Medellin. The financial earnings from the alliances with the Mexican narcoterrorists have also served for the expansion of the conflict in Colombia, along with mass displacements, civilian massacres, and the destruction of the social and state orders in the Andean nation. The Mexican cartels' wars are fighting with each other at home have also been exported to Colombia since the Mexican cartels take opposite sides between the different local armed groups in local conflicts.

Ten years ago, some analysts rejected a Plan Colombia for Mexico, arguing that historically speaking, the Mexican state had a strong presence throughout the country, and much of the violence was occurring in urban centers. However, the Cartels in Mexico are now spread all over the country, including in rural and local areas, where their power has overtaken the local authorities. These cartels are behaving more like a terrorist insurgency, and the lessons from Colombia are no longer irrelevant.

In Colombia, however, after the disgracefully failed peace talks under the Pastrana administration, there was much enthusiasm and desire for crushing the FARC, something that is absent from the Mexican government under the administration of AMLO. This is important, as Plan Colombia was not the only element responsible for stabilizing the country. Through a series of policies in Colombia, the government created a network of more than one million informants who were essential for military intelligence, deployed special counterterrorism units to urban centers and to the borders, and built military bases in strategic regions. Social policies also tried to restitute land and compensate victims. A "war tax" was also imposed on citizens to complement foreign assistance from the United States. In essence, the aim was to ramp up the military machine while providing security to industrial production, population centers, routes of communication, and social safety to the country's nationals.

The money the Mexican narcoterrorists make has allowed them to buy the citizens and politicians' support and rights where they operate, provide welfare and infrastructure, and buy sophisticated military machinery and equipment that are no match for law enforcement organizations. To be sure, the terror-crime nexus has been witnessed by al Qaeda/the Taliban/ISIS and drug, tobacco, and oil smugglers. But in Latin America, the large armies and military effectiveness of former A.Q. affiliate Jabhat al Nusra (later renamed HTS) or ISIS are possessed by the so-called "cartels".
As a result, the United States needs to designate the Mexican "cartels" as Foreign Terrorist Organization(s) since the powerful Foreign Narcotics Kingpin Designation Act has been insufficient to degrade them. Doing so will broaden the U.S. government's toolkit if the Mexican government is unwilling or unable to confront them. The fear of hurting bilateral relations should no longer be on the table. American diplomacy needs to put the same level of pressure on Mexico that it imposed on Colombia in the 1990s. Indeed, this was instrumental for Colombia to be more serious about political corruption and turning the tide. Otherwise, the U.S. risks having a failed narcostate right on its border.

The Mexican narcoterrorists also fulfill the three legal requirements to designate an FTO (be foreign, engage in terrorist activity, and threaten the security of the U.S.), under Section 219 of the Immigration and Nationality Act, as amended by the 1996 Antiterrorism and Effective Death Penalty Act. Some argue the cartels only have financial interests and no political objectives. But after the consolidation of considerable power, territory, and support, it has been impossible for these large Latin American organizations to avoid political aims and obligations. Similarly, all armed groups transform. The FARC, for example, went from a peasant self-defense group to an agrarian movement searching for a political ideology, to an autonomous organization with politico-military objectives.

The time has come to treat narcoterrorists in Latin America the same way the U.S. treats Islamic terrorists, even if it means having a rocky relationship with Mexico for the time being.