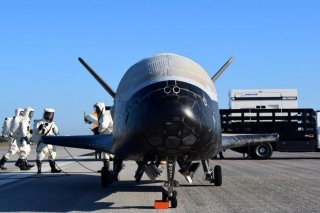 April of 2020 was a busy month in space for Iran and Russia, the former launching its first military satellite that now flies over America in a south-to-north orbit similar to North Korea’s two satellites, and Russia launching a direct-ascent satellite-killer (anti-satellite, or ASAT) missile.

In February, two Russian satellites were reported to be closely “observing” a secret U.S. satellite, thus illustrating capability for a space-based ASAT attack. The Space Force called this “unusual and disturbing” and potentially “dangerous.” [3] Other U.S. responses were (for Iran) “a cover for nuclear weapons advancement” [4] and (for Russia’s ASAT missile) a Space Force commitment “to deterring aggression and defending the Nation” [5].

Such statements are likely interpreted by Iran, North Korea, Russia, and China as mere words, and toothless, without a visible U.S. means to directly counter such actions.

Spaceplanes would put immediate teeth behind such words. Two flyable prototypes are in service as part of the Air Force’s rocket-launched X-37B space experiment, which has been conducting space missions since April 2010. [6] These planes have spent much time in orbit, can change orbits, carry sizable payloads to support many tasks, and land on runways.

One of these planes is scheduled for launch on May 16 and reported to contain a service module that enables the X-37B “to expand the capabilities of the spacecraft and host more experiments than any of the previous missions.” [7] Hopefully, one element of these experiments will be relevant to countering ASAT attacks.

Both X-37Bs should be upgraded to contain initial counter-ASAT capabilities—sensors and interceptors for all ASAT types—thus making real the Space Force’s commitment to deter aggression and defend America. The next X-37B launch should occur by late-2020 or early-2021 and be counter-ASAT capable. More planes should then be built quickly to produce a formidable deterrent and defense against continued aggressive acts in space.

One squadron of space planes (13-16 new X-37C models plus the two modified X-37Bs) should be deployed—initially during 2022 and fully in 2023-2024—with at least 10 planes always in orbit. The others would be available for surge, spares, and testing new capabilities and concepts of operation in space.

As a minimum, these planes would have modules containing clusters of counter-ASAT interceptors and sensors, ample two-way communications for broad connectivity to sources of data and command-control information, and special-purpose equipment, all based on existing technologies and upgraded as improvements develop.

In addition to their obvious application for countering ASAT weapons, space planes could perform a multitude of important in-space missions. One example is inspecting suspect foreign space objects—particularly from North Korea and Iran—to ensure America knows what they are as well as being able to negate objects determined hostile, such as armed for an electromagnetic pulse (EMP) attack. [8a, 8b]

Another example is helping defend globally against small attacks by rogue-state ballistic missiles. Current land- and sea-based missile defenses have very limited capability. In contrast, space-based defenses against missiles can attack ballistic-missile payloads during launch, when they are most vulnerable, as well as along flight paths before re-entry, both valuable additions to existing U.S. missile defenses.

Unfortunately, space-based missile defenses, which were proven cost-effective decades ago, have been avoided, mostly because proponents of MAD (mutually assured destruction—in essence, a mutual suicide pact) have successfully argued it should be the primary deterrent [9].

Spaceplanes would complement and support space-based missile defenses as they are being deployed and later as they mature. For example, the planes could aid testing the missile-defense interceptors in various configurations and orbits as well as in conjunction with existing and soon-to-be-deployed launch warning and tracking satellites. This approach would help validate concepts of operation, communications, performance, and costs.

One defense analyst put it this way, “We do not have to have a space-based interceptive layer that … right out of the gate has to provide this global defense. We can have an initial capability… adapt it and learn from it and provide just a qualitatively different kind of boost-phase [defense] capability … in some parts of the globe. That is a completely cost-effective way to do that." [Heinrichs, 10]

That initial space-based defense layer should be deployed as soon as possible, which is by about 2025. It would consist of 1,000 space-based missile-defense interceptors. As with the counter-ASAT interceptors, existing technologies are readily available.

Several months ago, LtGen Steven Kwast (USAF ret) warned, ”If we do not master space, our nation will become indefensible.” [11]

On May 6 Air Force Secretary Barrett said, "So many of our systems are not defended and are vulnerable, and so it is important for us to deter aggressive action against American assets; but if deterrence fails, we need to be prepared to defend and, if necessary, shoot back." Space Force Commander General Raymond added that the nation is at a "strategic inflection;" noting U.S. dependence on space assets like never before, he said, "This is an opportunity to remain the best in the world, to stay ahead of those world threats." [12]

America has been warned. Space Force recognizes both the dangers and opportunities. Whatever challenging paths in space lie ahead, sophisticated space planes—U.S.-built or otherwise—will eventually be in operation, and space-based threats will persist, almost certainly grow. America must “remain the best” and not fall behind in space as it did over recent decades with hypersonics.

In particular, U.S. research and development should proceed toward expeditious development of the hypersonic propulsion capabilities needed to enable much more capable space planes by the late-2020s, with the goal of conducting both remote-controlled and manned operations with new planes by the early 2030s.

The budget cost of rapidly deploying both defensive systems would be relatively small—in the range of 3-4% of the approximate $1 trillion likely needed to simultaneously modernize America’s nuclear arsenal to sustain MAD and catch up, at scale, in the arms race for hypersonic weapons.

This modest commitment to defenses, for a change, is worth a try. The costs to America of not making such a commitment could be enormous.

Norm Haller has led and assisted analyses, planning, and preparing reports for DoD and Congress on nuclear and non-nuclear forces for deterrence and defense against missile attacks; now a consultant, he served in the Air Force, Office of the Secretary of Defense, and Nuclear Regulatory Commission as the Chairman’s Executive Assistant.

Dr. Peter Vincent Pry is executive director of the Task Force on National and Homeland Security. He served on the Congressional EMP Commission as chief of staff, the Congressional Strategic Posture Commission, the House Armed Services Committee, and the CIA. He is author of "Blackout Wars," and also of "The Power and the Light," available on Amazon.com.