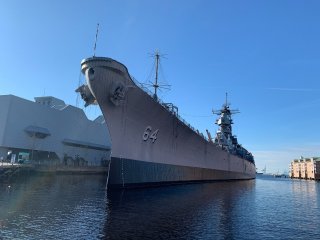 Here’s What You Need to Remember: By 1958, all four Iowas had returned to the reserve fleet. Although they performed their shore bombardment role effectively, but not really any more effectively than the smaller, cheaper heavy cruisers. The manning requirements were significant, however, making them very expensive ships to operate for extended periods of time. The navy would only reactivate one of the four (USS New Jersey) for the Vietnam War, and only in partial service.

The Iowas certainly delivered a great deal of ordinance to target on the Korean Peninsula over the course of the war. However, the overall impact of their presence is difficult to assess. Communist forces quickly learned to move critical facilities and troop concentration outside of the range of the battleships’ guns, although the transport network was hard to shift inland. Heavy U.S. bombing of target across Korea contributed to the general destruction, making it hard to parse out how much the battleships themselves mattered. The smaller, cheaper heavy cruisers could often deliver similar levels of destruction to enemy targets. Still, the very presence of the battleships may have had some degree of psychological effect on Communist and UN forces alike.