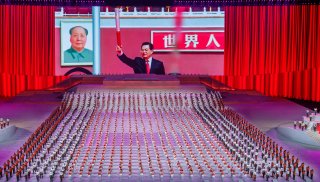 Here's What You Need to Remember: Pursuing “modern socialism” presents many risks for China. It could quash or at least erode the country’s entrepreneurial energy, which has helped make China an economic superpower.

Market capitalism has passed the market test. It’s a socioeconomic system that has propelled humanity to a standard of living unimaginable 200 years ago. Calling that transformation in human welfare a secular “miracle” is hardly an overstatement. Amazing things have happened in any place that’s allowed or enabled even a smidge of economic freedom.

And that includes China. But now China has a problem. The success of its private sector poses a challenge to the supremacy of the state — or, to be more precise, the Chinese Communist Party (CCP). And once you understand that the CCP’s continued supremacy is a non-negotiable, you understand why Xi Jinping is “trying to roll back China’s decadeslong evolution toward Western-style capitalist and put the country on a different path entirely,” according to a deeply reported piece by Wall Street Journal reporter Lingling Wei.

These moves are about a lot more than just reining in China’s version of Big Tech for competition reasons. Again, from the piece: “In Mr. Xi’s opinion, private capital now has been allowed to run amok, menacing the party’s legitimacy, officials familiar with his priorities say.”

Back in January, Xi said China was shifting into a different stage of development, leaving state capitalism behind as it now moves toward becoming a “modern socialist power.” That means market forces would be steered more directly by the CCP-run state to meet the goals that Xi and the CCP set, such as being global dominant across a range of emerging technologies and high-end manufacturing sectors.

In that context, for example, China’s recent crackdown on online video gaming is about a lot more than helping Chinese parents worried that their kids are neglecting their schoolwork. As technology analyst Dan Wang told Bloomberg recently, “Video games, children really shouldn’t be playing too many of those. They should be working in clean rooms for semiconductors instead. I’m exaggerating a little bit there, but I think that is a little bit more of the theme that China wants to do. Regulate the market better, and then to prioritize the right sorts of technologies.”

Pursuing “modern socialism” presents many risks for China. It could quash or at least erode the country’s entrepreneurial energy, which has helped make China an economic superpower. There’s also the long record of failure of central planners in trying to create an economy that exists on the technological frontier rather than just playing catch-up. As Chang-Tai Hsieh, an economist at the University of Chicago Booth School of Business, writes in a recent column:

Or consider the US obsession with the Chinese government’s so-called “Made in China 2025” plan, which channels subsidies to private firms in “strategic” sectors such as semiconductors. The jury is still out on whether the billions of renminbi spent to support such industries will prove effective, but the evidence so far is not encouraging. The dominant global semiconductor manufacturer is Taiwan Semiconductor Manufacturing Company, not the Chinese champion Shanghai Semiconductor. And until now, the huge sums that China has plowed into this sector have resulted in spectacular failures such as the Hongxin Semiconductor, and the emergence of close to 60,000 new companies that have no technological expertise but are seeking to capitalize on the subsidies. Such outcomes are all too common when governments subsidize industrial sectors, perhaps owing simply to a lack of accountability. After all, who is held responsible when billions have been wasted and the officials who allocated the funds have moved on to other posts?

But what choice do the Chinese communists have? They cannot permit a socioeconomic system that challenges their authority. And the private sector has now grown large enough and powerful enough that such a situation is at hand. So they are responding in the only way they can given that self-imposed constraint — continued authoritarian control. Not that their response doesn’t fit into their ideological priors. Lingling Wei:

Underpinning Mr. Xi’s actions is an ideological preference rooted in Mao’s development theories, which call state capitalism a temporary phase that can help China’s economy catch up to the West before being replaced by socialism. An ardent follower of Mao, Mr. Xi has preached to party members that the hybrid model has passed its use-by date. A 2018 article in the party’s main theoretical journal, Qiushi, or Seeking Truth, laid bare his belief: “China’s practice shows that once the socialist transformation is completed, the basic socialist system with public ownership as the main body is established. . . [and] state capitalism, as a transitional economic form, will complete its historical mission and withdraw from the historical stage.”

Of course, America and its leaders do have a choice of what to do next. They could take inspiration from China and involve the government far more into the US economy. There’s little doubt that China’s effort to subsidize critical industries and technologies has encouraged some American policymakers to push for more federal R&D to go toward applied technologies rather than just basic research, as well as to create a new tax credit for domestic investment into semiconductor manufacturing facilities. But the best thing American policymakers can do is make sure they support the American way of free enterprise and entrepreneurial capitalism with government efficiently supplying public goods, such as basic research. Oh, and drawbridge down, not drawbridge up as regards trade and immigration.