America Should Think Twice Before Pushing Out China's Brightest Students From U.S. Universities 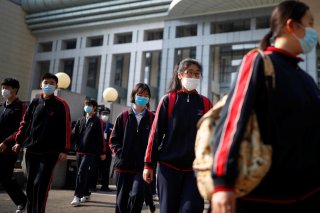 While some are pushing for Washington to create American refuge for Hong Kongers, Washington seems to be leaning in the other direction. The New York Times reports, “The Trump administration plans to cancel the visas of thousands of Chinese graduate students and researchers in the United States who have direct ties to universities affiliated with the People’s Liberation Army.” And some in Washington apparently would go further and prohibit all Chinese nationals from receiving visas to the United States for graduate or post-graduate studies in STEM fields.

It’s worth noting a few things. First, apparently none of this is about punishing China for its passage of a new national security law that undermines Hong Kong’s autonomy. Second, the NYT notes that US officials “acknowledged there was no direct evidence that pointed to wrongdoing by the students who are about to lose their visas.” Third, there are some downsides here that are certainly worth noting. This from a 2018 Wall Street Journal op-ed by Dartmouth’s Philip Hanlon and Matthew Slaughter:

Most Chinese STEM graduates don’t want to take their skills back. Between 2012 and 2015, 83% of Chinese students who completed doctorates in science or engineering in the U.S. reported plans to stay in the country. That’s a much higher rate than from almost any other country. Only about half of German doctorate recipients, for instance, want to stay. In the years beyond earning their STEM degrees, Chinese students are much likelier to remain. Among foreign-born students who received science and engineering doctorates in America in 2005, 90% of those from China were still in the U.S. a decade later, the highest rate of any country. The figures for Europe and South America were 65% and 50%.

And there are the findings of this 2013 study:

The migration of young Chinese scientists to undertake graduate studies in U.S. universities is arguably one of the most important recent episodes of skilled migration. Using a new data set covering around 16,000 Ph.D. graduates in 161 U.S. chemistry departments, we show that Chinese students have a scientific output during their thesis that is significantly higher than other students. In fact, conditional on acceptance into the same programs, Chinese students perform about as well as the awardees of the NSF doctoral fellowship program. These results shed new light on the benefits of student migration on scientific productivity of destination countries.

I would also recommend this blog post of mine from April that compiles other research that policymakers might want to consider. Finally, I want repost this perspective from Alex Stamos, Facebook’s former chief security officer who now teaches and researches at Stanford University:

My Chinese-born students have always engaged thoughtfully and openly during what must be difficult subjects involving their country of origin. Privately, many of these students are clear that their goal is to stay in the United States (usually Silicon Valley) and to make a new life for themselves and their families. The ones that are likely to head back to China talk about making it a more open and democratic society. These students are caught between two worlds, treated with suspicion in America while still monitored by Chinese security services. I know of at least one student whose parents in the PRC were threatened due to his research at a US university.

Silicon Valley was built by immigrants, as was much of the A-Bomb before that. America’s soft power is our great competitive advantage, especially as we consider the Sino-American competition that is likely to define the 21st century. That the world’s best students want to study in American universities (and very likely stay here) is an advantage that any other nation would kill to have. If Sen. Cotton is concerned about students returning, then he can help adjust the visa system to keep the best.

Learn more: What are the downsides to banning Chinese science students from American universities? | To reject immigrants would be a choice for rapid American decline | Don’t let more isolationism and autarky be the legacy of this pandemic

This article by James Pethokoukis first appeared in AEIdeas on May 28, 2020.