America Should Worry about Chinese Tanks in Taiwan 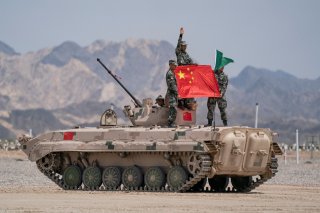 Here's What You Need to Remember: An ability to transport a Type T99 main battle tank would be massively significant to any kind of ground war effort, especially since the U.S. Army M1 Abrams tanks need to deploy overseas by boat. Air deployment of a massive tank exponentially decreases deployment attack timelines and would enable a heavy mechanized force to strike on a vastly different timetable.

An ability to transport a Type T99 main battle tank would be massively significant to any kind of ground war effort, especially since the U.S. Army M1 Abrams tanks need to deploy overseas by boat. Air deployment of a massive tank exponentially decreases deployment attack timelines and would enable a heavy mechanized force to strike on a vastly different timetable.