America Wants to Rename Army Bases Named For Confederate Leaders. Here's How to Get It Right. 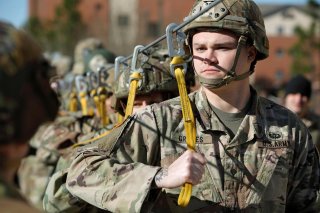 Army base names are important because an installation's name should reflect, inspire, and build aspirations of excellence for the soldiers that serve there.  Serving at Fort Bragg meant lots of parachuting, hard training, combat deployments, and entry into the world of Special Operations.  Serving at Bragg did not mean respect or even admiration for older, mostly forgotten Confederate leaders.  The current challenge for the U.S. Army is to identify with historical leaders and historical events that reflect the diversity and complexion of the United States and portray the values of honor, respect, duty, sacrifice, leadership, and excellence of the U.S. Army.  Furthermore, across the globe, there is an inconsistency in naming U.S. bases.  I served at Camp Liberty Bell for a few months, and General Marshall, who led the Joint Staff during World War II, and engineered the simultaneous global military defeat of Japan, Italy, and Germany, only has a small academic center in Europe named after him.  I believe, given this opportunity, that the U.S. Army can do better.

Rename Every U.S. Army Base After World War II Leaders

World War II was and remains the seminal event in U.S. Army history.  The U.S. Army fought in multiple theaters of operation from Burmese jungles to African deserts to European forests.  Furthermore, the large supply of skilled leaders from all branches, including the Women’s Army Corps (WAC) and Army Civilians, ensures an adequate supply of leaders spanning all minorities and genders.  Re-naming Fort Bragg, the home of U.S. Army Airborne forces, to Fort Gavin, after General “Jumping Jim” Gavin of the 82nd Airborne during World War II, is a fitting and non-controversial decision that properly continues the history of Fort Bragg.

Rename Every U.S. Army Base After Historical Battles

Renaming bases after battles is an avenue that places the focus on what the U.S. Army does: fights and wins the nation's wars.  The use of historical battles as base names allows a complete historical memory of the U.S. Army, incorporates the division of the Civil War, and passes muster among the population of the United States.  In this manner, a Fort Wilderness (Civil War), a Fort Ticonderoga (Revolutionary War), or a Fort Remagen (World War II) will use fort names to emphasize the historical actions and victories of the U.S. Army defending the United States.

Rename Every U.S. Army Base After Valor Award Recipients

Valor award receipts are those that received a valor award in direct ground combat.  These awards, more than rank, truly signify the respect soldiers have for valor award recipients.  The Silver Star, Distinguished Service Cross, and Medal of Honor recipients form a pool of ethnically diverse, primarily lower ranking soldiers.  Too many valor award recipients gave, as President Lincoln stated in the Gettysburg address, "their last full measure of devotion" to maintain the United States and protect their fellow soldiers.    Schofield Barracks in Hawaii could be renamed Kagawa Barracks after Staff Sergeant Buddy Y. Kagawa, a Japanese American, who received a Distinguished Service Cross (DSC) as a member of the 442nd Regimental Combat Team during World War II.

The names of Benning and Bragg dot my military resume more than five times over 20 years.  I’m not opposed to changing a base's name, but I worry that name changing will make us forget aspects of our history that, although vile, need to be remembered and constantly resurfaced because they are vile.  A proper remembering of history should make you simultaneously want to cheer and want to cry.  It is vitally important to keep the memory of historical mistakes alive least they repeat.

The future direction of the U.S. Army must be to reengage, fully, with the entire U.S. population with the recognition that a force diverse in gender, role, and race is the best defense of the country in the future.  The renaming of every single U.S. Army installation, from fort to base to depot, in a consistent and historically researched manner with a consistent selection methodology will closer align the future U.S. Army to the United States population.  The existing Confederate naming of U.S. Army bases is a telling representation that the U.S. Army needs to better align its image with the faces and names of those in its ranks.

Chad Storlie is a retired U.S. Army Lieutenant Colonel (Special Forces), an Iraq combat veteran, and has 15 years of university teaching experience as an adjunct Professor of Marketing.  He is a mid-level B2B marketing executive and a widely published author on leadership, business, data, decision making, military and technology topics.  He is an MS, Data Science candidate at the University of Wisconsin.

This article by Chad Storlie first appeared in Real Clear Defense on June 16, 2020.