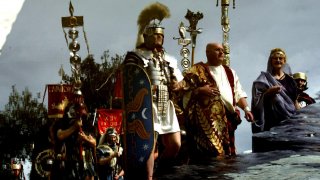 Image: Englishmen from Newcastle, dressed as ancient Romans of the II Augusta Roman Legion, are reflected in a puddle as they march during a parade in Rome April 18, 2004. REUTERS/Max Rossi MR/CRB