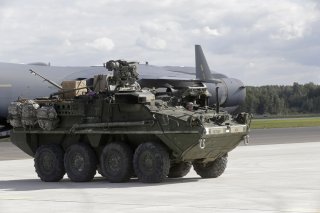 Here's What You Need to Remember: The operational concept is to bring short-range air defense back to ground war, as it is something senior Army leaders say “atrophied” to a certain extent during years of counterinsurgency missions during which enemies presented little or no air threat.

In development for several years, M-SHORAD Strykers are armed with a first-of-its-kind drone, fixed wing and helicopter-killing counter air ability as part of the Army’s broader push to prepare the force for massive land war on the European continent against a great power adversary like Russia.

An Army report says the service will field 144 M-SHORAD systems to four battalions in Ansbach, Germany, beginning this year, as a first step toward a larger deployment. The vehicles will support the 10th Army Air and Missile Defense Command, a unit naturally focused upon protecting advancing ground forces from a growing range of incoming air attacks.

Not only will M-SHORAD offer advancing infantry a new ability to destroy enemy drones and helicopters, but it will also protect them from incoming artillery, rockets and mortar fire as they maneuver to “close with an enemy.”

A possibility to intercept or counter incoming enemy rockets from the ground while on the move certainly brings a new dimension to modern Combined Arms Maneuver which increasingly needs to conduct operations with a specific mind to newer kinds of air threats such as precision-guided enemy artillery, attack drones and longer-range weapons.

Yet another key dimension of this is that the Army report explains that “laser” interceptors will soon be incorporated into M SHORAD, an extremely significant tactical change greatly improving the speed and scalability of on-the-move counter drone operations.

The operational concept is to bring short-range air defense back to ground war, as it is something senior Army leaders say “atrophied” to a certain extent during years of counterinsurgency missions during which enemies presented little or no air threat. The need for short range air defense was considered crucial during the Cold War years, and now it has returned. The prospect of firing HELLFIRE or Javelin anti-tank missiles from a moving Stryker vehicle introduces particular implications with respect to the Pentagon’s vigorous push toward multi-domain attack operations. Incoming air threats such as enemy munitions or drones could be identified by friendly surveillance assets or even air attack platforms such as fighter jets in a position to network targeting and threat details to advancing land units. This kind of “meshed” or networked combat could prove extremely key in the event that an attacking Army mechanized ground force did not have air superiority or close air support.

Drone defense is fundamental to M-SHORAD as Pentagon planners have been expending considerable technical, scientific and even operational energy focused upon identifying new ways to counter drone attacks such as swarming explosives or high-speed, missile armed enemy drones. Firing HELLFIRE missiles, or lasers into the air against fast-approaching enemy air threats introduces an unprecedented defensive combat tactic when it comes to high-speed, multi-domain joint warfare.