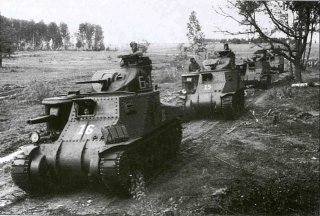 Here's What You Need to Know: In the end, the M-3 did prove a versatile vehicle for the British, who used it as a self-propelled artillery chassis, tank recovery vehicle, and to mount giant searchlights. Most interestingly, the Canadians removed the turret to create the Kangaroo armored personnel carrier, just as today's Israeli army uses tank hulls to create heavily armored infantry carriers. In post-war Australia, surplus grants were also converted to farm tractors.

In the end, the M-3 did prove a versatile vehicle for the British, who used it as a self-propelled artillery chassis, tank recovery vehicle, and to mount giant searchlights. Most interestingly, the Canadians removed the turret to create the Kangaroo armored personnel carrier, just as today's Israeli army uses tank hulls to create heavily armored infantry carriers. In post-war Australia, surplus grants were also converted to farm tractors.