American TOW Missiles Knocked Out a T-90 Tank in Syria 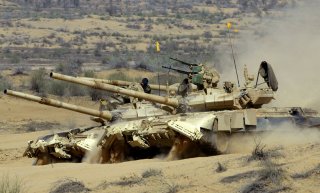 Here's What You Need to Remember: The main thing is that the armor appeared to accomplish its job. Losing a tank from the front line is one thing — it can always be replaced or repaired. The Syrian army was likely relieved to have saved the crew from being killed.

We saw the wire-guided missile bob toward the T-90, which was parked on a crest between two low-slung buildings.

For all the videos coming out of the Syrian civil war, a one-minute, 31-second clip of a U.S.-made TOW missile slamming into a T-90 tank got more attention than most. In the video uploaded in February, Russia’s most advanced operational battle tank met one of the United States’ main tank killers on the battlefield.

The T-90 was Russian-made, but likely crewed by Syrian troops. The missile was supplied by the United States — most likely via Saudi Arabia or the CIA — to the Hawks Mountain Brigade fighting near Aleppo.

Robert Beckhusen is the managing editor of War Is Boring. This piece first appeared in War Is Boring here and is being republished due to reader interest.