Americans Abroad Were Part of the Largest Voter Turnout in U.S. History 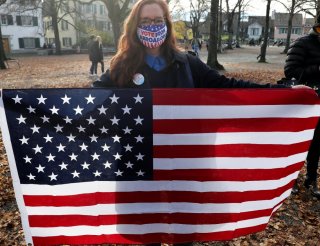 Americans abroad, like those in the United States, are transfixed by U.S. President-elect Joe Biden’s high-stakes inauguration on Jan. 20. It will be unusual and somewhat surreal, to say the least, to see an incoming president sworn in before the U.S. Senate holds a trial on the outgoing president Donald Trump’s second impeachment following the attack on the U.S. Capitol.

A notable feature of the 2020 election was the swell of Americans who requested and cast mail-in ballots due to COVID-19. American voters living abroad also requested record numbers of absentee ballots from their home states.

Eligible U.S. citizens living abroad have the right to vote in federal elections, and they must register each year. Americans representing every state and district are dispersed throughout the world, and mobilizing their votes is no small task.

In the mid-2000s, Democrats Abroad, an all-volunteer organization and the official branch of the Democratic Party representing Americans living outside the U.S., recognized that in order to reach as many U.S. voters as possible, they needed to brand their online tool and build a promotional strategy around it.

An international volunteer team of marketing, branding, graphic design and media experts collaborated to position Vote From Abroad as a destination website for American voters. As a design and branding expert, I was a member of the Democrats Abroad global marketing team during that time.

Democrats support increasing voter access. According to Pew Research, “Democrats also are more likely than Republicans to support making access to early and absentee voting universally available: 83 per cent of Democrats favour this, compared with 57 per cent of Republicans.” Absentee ballots (domestic, overseas and military) were requested by far more Democrats than Republicans in the 2020 election.

It’s yet unknown what the total of absentee votes from abroad was across all states. Iowa saw a 40 per cent increase in early voter turnout for overseas citizens. The 2020 election saw the largest total voter turnout in U.S. history: more than 159 million Americans.

Democrats Abroad International Chair, Julia Bryan, says that she has not yet seen a tally of total votes from abroad. She notes the numbers will likely be released by the U.S. Election Assistance Commission in their Election Administration and Voting Survey (EAVS) Comprehensive Report later this year.

This commission reports that in 2016, 930,156 overseas ballots were “transmitted and 68.1 per cent of these ballots were returned.”

The Vote From Abroad website nearly tripled its traffic from 2016, receiving more than 766,680 unique visitors to the site more than one million times. Democrats Abroad estimates that approximately 1.8 million eligible American voters living abroad received ballots in the 2020 election.

Destination branding typically capitalizes on a shared sense of place, as experienced by local residents, usually to attract tourist dollars. The Democrats Abroad marketing team inverted that idea. It invoked a sense of patriotism to remind people far and away from the U.S. of their affiliation to a common home and of their right and duty of citizenship.

The team developed a clear, friendly graphic style: the use of deep blue, accented with white and red, the ubiquitous star, a subtle nod to stripes that has featured on print materials through the years, all refer to a common, inherently understood visual language representing the U.S.

Similar to brands that target diaspora communities, Democrats Abroad has steadily built a multi-layered global network of U.S. emigrants through 45 country committees. There are also special interest caucuses that transcend country affiliation. At the hub of the network, the vortex of activity, especially every four years, is Vote From Abroad.

Democrats Abroad relies on the efforts of volunteers globally to produce and distribute branded materials to promote and drive visitors to the site. What began nearly 15 years ago as a logo, banner and giveaway items produced from templates provided by the marketing team has evolved dramatically. It now encompasses an active social media presence and committees creating their own materials, with the Vote From Abroad logo remaining largely intact in a range of uses.

The degree of ownership country committees claim over the branded materials for their events — participatory esthetics — allows, as communication scholar Thomas J. Billard notes, for “more fluid dynamics” of communication between the campaign and the public.

Vote From Abroad has established itself as a brand community, in service to the people in it, whose goal is participating in the fundamental right of citizenship.

Voters then connect to a larger community of shared values. Having that set of needs met, voters feel inspired to respond in a range of ways, from proudly representing Vote From Abroad on social media to volunteering their skills to mobilizing others to register to vote, all of which extend and strengthen the brand, creating a reciprocal relationship, from access to extension.

The American diaspora is far from monolithic. But citizens who make the effort to engage in the democratic process from abroad certainly share a love of country. Vote From Abroad is a tool that facilitates access to the process. It is also an effective brand community, fostering an engaged global network via social media.

All components of the brand work together to facilitate Americans’ access to voting, to fuel their enthusiasm to be involved, to connect with each other and to influence issues at home and the global standing of the U.S. — all based on informed perspectives from living outside of it.