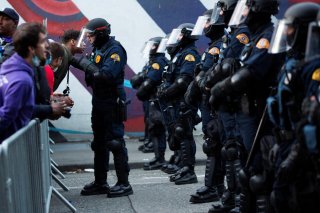 Before you can fairly assess the legitimacy of the ongoing protests or the quality of the government’s response, you must understand the relevant facts. And the most relevant fact is that America’s criminal justice system is rotten to its core. Though that certainly does not justify the violence and wanton destruction of property perpetrated by far too many protesters, it does provide useful context for comprehending the intensity of their anger and the fecklessness of the government’s response. If America is burning, it is fair to say that America’s criminal justice system—which is itself a raging dumpster fire of injustice—lit the fuse.

I feel moved to write these words because it appears from some of the commentary I’ve been reading—including even from libertarian circles—that many people who consider themselves to be generally skeptical of government and supportive of individual rights have no idea just how fundamentally broken our criminal justice system is and how wildly antithetical it has become to our core constitutional values.

Within days or weeks, most protesters will renounce the use of lawless violence as a tool of politics; but the state will not. That’s the key takeaway and the thing you really need to understand about this moment in time.

As I will explain below, I see three fundamental pathologies in America’s criminal justice system that completely undermine its moral and political legitimacy and render it a menace to the very concept of constitutionally limited government. Those three pathologies are: (1) unconstitutional overcriminalization; (2) point‐​and‐​convict adjudication; and (3) near‐​zero accountability for police and prosecutors.

1. Unconstitutional overcriminalization. What is the proper role of a criminal justice system in a liberal democracy? Simply put, it is to employ state‐​sanctioned violence to discourage and punish conduct that threatens the very fabric of civil society—things like murder, violent assault, theft, and fraud. So the first and most basic pathology of America’s criminal justice system is that it vastly exceeds the scope of what a criminal justice system may legitimately seek to address while routinely using force against peaceful people in morally indefensible ways.

Take, for example, the Shreveport, LA, ordinance that made it illegal to wear saggy pants. There were 726 arrests for violating that law during the 12 years it was on the books—96 percent involving black men—and it wasn’t until police shot and killed a man named Anthony Childs while trying to arrest him for wearing saggy pants that the law was finally repealed.

Similarly, of the three most‐​preferred drugs in America—alcohol, nicotine, and marijuana—marijuana is by far the safest in terms of consumption‐​related deaths. But despite that fact and the massive push towards decriminalization, the number of arrests for marijuana offenses has been rising, not falling. For example, in Virginia, where I live, there were nearly 29,000 arrests for marijuana offenses—triple the number from 1999. All of those arrests, by definition, involved the actual or threatened use of state‐​sanctioned violence for conduct that appears to be no more harmful (and indeed, may well be considerably less harmful) to society than the purchase and consumption of the alcoholic beverages sold at any of the 370 stores operated for profit by the government of Virginia.

It is immoral to use force against another person without sufficient justification, and that is true even when the perpetrator is acting at the behest of the state. At the risk of stating the obvious, the fact that a person prefers the “wrong” not‐​particularly‐​harmful intoxicant is not a sufficient moral justification for doing violence to that person. Nor should it represent a sufficient constitutional justification for employing state violence, but unfortunately—and to its immense discredit—our judiciary says otherwise.

I have written a whole book about the judiciary’s failure to properly enforce constitutional limits on government power, and I will not repeat the arguments here. Suffice it to say, a baseline constitutional limit on government is that it may not arbitrarily interfere with people’s liberty—including how to worship, where to travel, or what to ingest. Working together, however, the three branches have essentially hacked that limitation using what amounts to a constitutional magic trick whereby the legislative and executive branches simply lie in court about their true justification for enforcing various laws and the judiciary pretends to credit those fraudulent explanations for restricting people’s freedom.

Combining the powerful public‐​choice dynamics that motivate legislators to constantly and indiscriminately expand the scope of the criminal law with the judiciary’s feckless refusal to enforce the Constitution’s prohibition against unjustified restrictions of liberty results in a criminal justice system that routinely does violence to perfectly decent people for non‐​morally‐​wrongful conduct that presents no real threat to other people or to society. That is the essence of “unconstitutional overcriminalization,” and it does incalculable damage to the moral and political legitimacy of our criminal justice system.

2. Point‐​and‐​convict adjudication. Unconstitutional overcriminalization could never have become the menace it is today if all criminal charges were adjudicated using the constitutionally prescribed mechanism of a jury trial. That’s because jury trials are expensive and require twelve people to take time away from their jobs, families, and personal lives in order to decide whether to condemn a fellow human being and authorize the often quite vicious punishment the state seeks to inflict. If people are constantly being asked to put their lives on hold in order to help adjudicate trivial “crimes” such as low‐​level marijuana distribution, it will not be long before they send a clear message to prosecutors to stop wasting their time—and taxpayer money—on the enforcement of mickey‐​mouse laws that don’t make people’s lives any better or the community any safer.

But the government has hacked yet another key constraint against the abuse of criminal law by replacing expensive, inefficient, and uncertain jury trials with a method of adjudicating criminal charges that is cheap, efficient, and certain: coercive plea bargaining. Indeed, so proficient have prosecutors become at inducing people to condemn themselves that more than 95 percent of all criminal convictions today come from guilty pleas rather than jury trials. As the Supreme Court itself has observed, “[American] criminal justice today is for the most part a system of pleas, not a system of trials.”

Inducing people to condemn themselves is an inherently squalid business, particularly in a system that purports to guarantee something as precious—from the standpoint of the accused—as a jury trial. Think of it this way: How on earth would you get someone to choose the certainty of conviction and punishment if they plead guilty over the possibility of acquittal and freedom if they exercise their constitutional right to require the government to prove their guilt beyond a reasonable doubt to the satisfaction of a unanimous jury? The answer is pressure—and lots of it.

Again, I have written extensively about the various coercive levers routinely employed by prosecutors to elicit guilty pleas from the guilty and innocent alike. Those levers include pretrial detention, charge‐​stacking, mandatory minimums, the notorious “trial penalty,” and even gratuitous threats to indict a recalcitrant defendant’s family members.

Coercing criminal defendants into waiving their constitutional right to a jury trial is of course patently unconstitutional. But if you’ve been paying attention, you can probably guess where the story goes next. That’s right: Straight to the doorstep of our feckless judiciary, which has made itself complicit in this point‐​and‐​convict style of coercive adjudication by systematically turning a blind eye. Thus, for example, in a 1978 case called Bordenkircher v. Hayes, the Supreme Court rejected a due process challenge to a prosecutor’s nakedly coercive threat to increase a defendant’s exposure from a maximum of ten years to life imprisonment if he refused the prosecutor’s invitation to accept a five‐​year plea offer. And in a 1992 case involving the spy Jonanthan Pollard, the D.C. Circuit held that it is categorically non‐​coercive to threaten to indict a defendant’s relatives in order to exert plea leverage.

The judiciary’s collective indifference to the use of coercion in plea bargaining has resulted in the practical elimination of jury trials and enables the government to obtain convictions without the expense and inconvenience of that constitutionally prescribed procedure. As a matter of simple economics, when the cost of a particular good—whether it be automobiles or criminal convictions—comes down, consumption will rise, which appears to be precisely what has happened in America’s hypercarceral criminal justice system.

Thus, if you think of the criminal justice system as a massive woodchipper that sucks in people and spits out convicts, the jury trial was meant to be a kind of aperture‐​restrictor over the maw of that ravenous machine. Again, trial by jury is a relatively expensive and inefficient mechanism for adjudicating criminal charges, and it ensures that neither the government nor society at large takes lightly the act of condemning human beings and putting them in cages. Coercive plea bargaining represents the government’s success in prying off that aperture‐​restrictor to enable the criminal‐​justice woodchipper to operate at full capacity and ensure that America continues to have the highest incarceration rate in the world.

3. Near‐​zero accountability for police and prosecutors. The third and final pathology of America’s criminal justice system that I will discuss here is our near‐​zero accountability policy for members of law enforcement, including particularly police and prosecutors. Cato’s Project on Criminal Justice has written extensively about the cornerstone of that policy, qualified immunity, in recent days, so I will cut to the chase.

The bottom line is this: American police and prosecutors wield extraordinary power over the lives of others—including even the power of life and death—and yet they are among among the least accountable people on the planet. And just because the killers of George Floyd are being prosecuted for murder, no one should be fooled into supposing that that would have happened without a viral video of the incident, or if the officers’ violent assault had merely injured Floyd instead of killing him. The reality is that police are almost never prosecuted for the crimes they commit under color of law, and the judiciary (starting to see a theme here?) has helped ensure that other avenues of accountability, including particularly the ability to bring civil‐​damages claims, are largely toothless.

Notably, what makes that fundamental lack of accountability particularly galling is that police and prosecutors are in the accountability business—for other people. Just listen to the closing argument of any prosecutor (if you can manage to find a criminal jury trial), and you will hear it dripping with sanctimony as the prosecutor recounts the details of the defendant’s transgressions and imprecates the jury to hold him or her responsible. But when the shoe is on the other foot and a fellow prosecutor stands credibly accused of committing crimes in the course of his or her official duties, then suddenly all concern for responsibility, accountability, and preserving the delicate fabric of civil society goes right out the window as the milk of human kindness flows freely from judges and other prosecutors alike.

A final point bears mentioning. America’s criminal justice system is fundamentally rotten, but the effects of its dysfunction are not felt equally by all Americans. Instead, it is the marginalized and politically disenfranchised who bear the brunt of that injustice, including particularly communities of color. Although both the root causes and the significance of racial disparities in our criminal justice system are debatable, the existence of those disparities is not. And when people perceive—correctly in my judgment—that some lives are counted by the system as less sacred than others, they are going to be angry about it. And they damn well should be.

This article by Clark Neily first appeared in CATO on June 7, 2020.