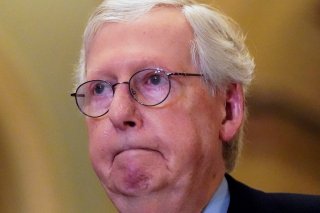 Did you know the United States is currently hard up against its credit limit? As of August 1, we are taking “extraordinary measures” to free up cash to meet our obligations because the suspension of the nation’s debt ceiling adopted during the Trump administration has expired.

These measures, best understood as low-grade accounting chicanery, aren’t really so extraordinary. The Treasury Department has been taking them every couple years as debt limit suspensions expire and are then renegotiated in Congress. (Yes, it is strange to constantly bump up against a credit limit that we ourselves, through our representatives in Congress, get to set; no, other countries do not do things this way; yes, it would be good if we would routinize this function so that we could direct our fiscal concerns to more sensible places in the budget process.) This pattern of expiration, extraordinary measures, and renewed suspension has been blessedly undramatic in our politics for the last eight years. Unfortunately, in 2021 it is looking like our Congress might bring back some of the excitement and terror that attended the debt limit increases in 2011 and 2013.

For those with short memories, a brief refresher on this recent history. After Republicans took control of the House after the 2010 midterms, they felt they had a mandate to impose fiscal discipline on the Obama administration. President Obama himself tried to negotiate a “grand bargain” with Speaker John Boehner (R-OH) in which both parties would agree to take their lumps, namely benefit reductions and tax increases. Hardline Republicans wanted no part of such a bargain, however, and went so far as to say that it might be worth forcing the nation to default on its debt obligations as a way of forcing it to put its fiscal house in order. Boehner and Obama’s efforts failed to yield fruit, and ultimately a hodgepodge of a compromise was agreed to at the last possible moment. That law, the Budget Control Act of 2011, set up a framework for our budgetary debates over the last decade — one in which our national debt expanded at an unprecedented rate for peacetime. But our near-miss with default led to a great deal of consternation, including in the financial world, represented by a downgrade of US debt by Standard and Poor’s.

In the fall of 2013, up against the debt ceiling again, a few Republicans once again strongly argued that default might be more desirable than a course of uncorrected profligacy. They helped shutdown the government for the first 17 days of that October — only to end when it appeared that extraordinary measures were running out of room and there was no viable alternative to increasing the debt limit. The continuing resolution that was adopted suspended the debt limit without a designated dollar amount, unlike past increases. Whereas fiscal conservatives could say that their 2011 stand had led to some real restraint, in 2013 their attempt to use the debt ceiling for leverage seemed to have gotten them nothing at all — indeed, it backed them into a corner and united business interests against them. As a result, although there was occasionally renewed talk of taking a stand on the debt ceiling, no politician seemed really determined to make it front-page news.

So why might this year be different? In short, Republicans are determined to exempt themselves of any responsibility for raising the debt limit at a time when Democrats are seeking to radically expand federal spending. By forcing Democrats to pass an increase (or, more likely, a new suspension) without their help, they can try to assign blame for increasing debt to the majority party.

This kind of behavior is entirely consistent with congressional practice over the better part of the last century. Minority parties frequently insist that the majority party shoulder the load of increasing the debt ceiling — which is politically unpopular, even if the spending and tax levels that have created the debt have broad public support.

As long as Democrats are willing to pass a debt limit suspension on their own, the chance of a real crisis is very low. And while a party-line increase of the debt limit would be a very painful vote for some “frontline” Democrats who hail from relatively red districts, there is no reason to doubt that the party will raise the ceiling when push comes to shove. Unlike Republicans in 2011 and 2013, there is no clamor for the harsh medicine of a default this time around; indeed, the fiscal climate has shifted significantly, with restraint having become decidedly unfashionable these days.

Still, one shouldn’t underestimate all the things that can go wrong in the Capitol these days. Debt ceiling drama could soon be upon us again. Unfortunately, stay tuned. . .

Philip Wallach is a senior fellow at the American Enterprise Institute.