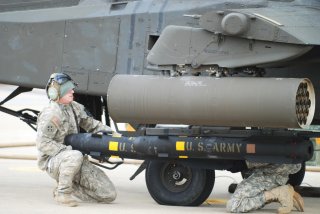 All that remains is a mangled shell of a Hellfire missile with six 18″ blades extending from its midsection, crushing, slicing, and killing anyone within about three feet of the impact. While a traditional Hellfire missile kills through a combination of explosive force and shrapnel projection that can take out bystanders as readily as the target, this blade-toting Hellfire cousin offers the means to take out a single bad guy while leaving people standing just feet away from him completely unscathed.

Brutal as it may seem to load a precision-guided Hellfire missile with a half-dozen retractable swords, the weapon has thus far proven far safer for the civilian populous than most other means of engaging high-value targets from a distance. Rather than taking out an entire building or city block, this weapon can target a specific seat in a vehicle.

Developed by the CIA under the Obama administration and wielded by America’s highly secretive Joint Special Operations Command, the AGM-114R9X, or Hellfire full of swords, could be thought of as an elegant but medieval solution to the problem of terrorists using civilians as protection against airstrikes.

Watch the video to learn more about this marriage of 21st-century technology and one of the oldest weapons of war, the sword.

The “ninja sword” Hellfire missile saw a sharp uptick in press late in 2019 after it was used twice in less than a week to kill different terrorists in Syria. The first strike took place on December 3, when an AGM-114R9X was used to engage the passenger seat specifically of a minivan in the Syrian city of Atmeh. The second took place somewhere between Afrin and Azaz, once again killing its target without injuring any bystanders.