America's Military Could Kills Millions in Minutes. So Why Does It Keep Losing Wars? 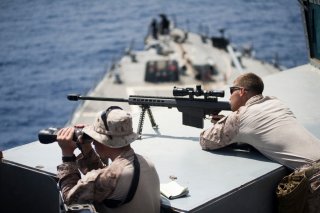 Here's What You Need to Remember: The best way to ensure we don't have to fight a war against one of those nuclear powers is to ensure our conventional forces are strong and thus deters any attack.  It is imperative, then, that we learn these painful lessons of the past few decades, end the self-defeating proclivity of sending the military to try and accomplish militarily unattainable tasks, and instead rebuild our core warfighting strength for when we may need it most.

We are often reminded by political leaders and pundits on television that the United States has the most powerful military in world history. Some wonder, then, why this uniquely powerful military has been unable to win the Afghan war, for example, after two decades of trying. The answers have more to do with what the military is ordered to do rather than how it performs its duty.

One of the primary reasons America can't seem to win wars in the modern era is because when it comes to issues related to war and peace, nearly every administration since Bill Clinton has enacted bad foreign policy. It's not merely that the Armed Forces have failed to subdue the enemy, it’s that the government has ordered the military to try and accomplish the unattainable—and that guarantees we'll fail to win.

I first deployed to fight in Operation Desert Storm in 1990–91. President George H.W. Bush gave a clear political and military objective: “Saddam Hussein's forces will leave Kuwait,” Bush declared, and the, “legitimate government of Kuwait will be restored to its rightful place, and Kuwait will once again be free.”

We marshalled a massive U.S. and coalition force (about 500,000 U.S. troops alone), beat the Iraqi army soundly, accomplishing Bush’s core objectives, and forced the remainder of Saddam’s forces back across the border into Iraq. Within months our troops withdrew back to their bases and New York held a famous ticker-tape parade to celebrate the conclusion of the war.

That was the last war we won—and the last time our leaders issued militarily and politically attainable objectives.

In response to the awful attacks on 9/11, President George W. Bush provided a clear, attainable, and limited mission to the initial military operation. He ordered them “to disrupt the use of Afghanistan as a terrorist base of operations and to attack the military capability of the Taliban regime.”  That was fully accomplished by the summer of 2002, and that's where the wheels started coming off.

Instead of following his father's lead and withdrawing the troops after the successful conclusion of the mission, Bush just let the military muddle along, without any identifiable mission, for five inconclusive years.  Bush's 2003 invasion of Iraq, of course, was a disaster in every sense of the word. Even after deposing Saddam, our forces were given no follow-on mission whose attainment would signal the end of the war.  We just “fought” an insurgency, conducting tactical actions divorced from strategic purpose.

Then in 2007 Bush moved the Afghan goalposts, saying the mission now was to “defeat the terrorists and establish a stable, moderate, and democratic state that respects the rights of its citizens, governs its territory effectively, and is a reliable ally in this war against extremists and terrorists.”  In other words, nation-building.

That mission, as articulated, could never be militarily accomplished. There were no military objectives that could have been assigned to an infantry brigade, for example, whose successful tactical accomplishment would have resulted in “a stable, moderate, and democratic state.”  Such explicit political objectives are not even within the capacity of the military to produce.

Obama worsened the problem in Afghanistan, doubling-down on Bush's nation-building objectives. In 2009, when ordering the Afghan surge, Obama said the mission had three objectives: “a military effort to create the conditions for a transition; a civilian surge that reinforces positive action; and an effective partnership with Pakistan.” The first order contained no militarily attainable tasks; the second two requirements weren't military tasks at all.

Obama also sent the military to help depose Qadhafi in Libya in 2011 with no plan for what came next, and returned troops to Iraq in 2014 and to Syria in 2015, without any objectives beyond “helping” Iraq and the Syrian Democratic Forces. Trump followed suit by leaving troops in Iraq, Syria, and support for the Yemen war without providing any militarily attainable objectives.  The results for every one of these operations has been that the military was left merely conducting “tactical tasks” detached from strategy for producing a conclusive outcome.

Our military has been almost uniformly successful at every tactical task it has undertaken since 1990 (with occasional botched night raids and errant missile/drone strikes that killed innocent civilians). The problem hasn't been an inability of our military to succeed on the battlefield. Our problem has been that successive Administrations have improperly used the military in an attempt to produce the unattainable. Our leaders have given objectives to the military to solve political and societal problems that military power can't fix.

Aside from the egregious cost we have paid in both blood and treasure for decades of military misuse, the underappreciated danger is that we have spent so much time, energy, and focus on small scale war, we have allowed our core warfighting skills to erode in an era when our greatest potential adversaries—Russia and China—have been improving theirs.

The best way to ensure we don't have to fight a war against one of those nuclear powers is to ensure our conventional forces are strong and thus deters any attack.  It is imperative, then, that we learn these painful lessons of the past few decades, end the self-defeating proclivity of sending the military to try and accomplish militarily unattainable tasks, and instead rebuild our core warfighting strength for when we may need it most.