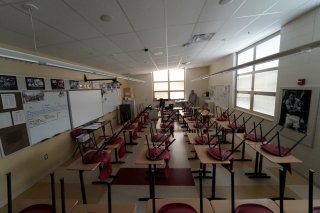 Classrooms, gyms and cafeterias at schools across the U.S. have remained empty for months now. And despite some districts beginning to reopen, many others will remain closed amid fears that prematurely restarting in-person classes could cost more lives in the pandemic.

Local, state and federal officials wrangle over how to make schools safe, with concern over how to sufficiently disinfect and ventilate schools. But for low-income students, their teachers and families, returning to school is a more risky proposition due to the age and condition of the buildings to which they would return.

In a 2018 report to Congress, the U.S. Commission on Civil Rights found that “low income students and students of color are often relegated to low-quality school facilities” that lack “physical maintenance.” This can “negatively impact a student’s health,” the commission concluded.

I have seen this firsthand. As a former school superintendent and now as a university professor working with K-12 schools, I see the inequities experienced by some of the U.S.‘s most vulnerable students as a stark reminder of the opportunity gap holding many back. By requiring them to attend schools in desperate need of maintenance, I fear that the schools and classrooms attended by low-income students of color could become epicenters of a second wave of pandemic.

Even before the pandemic, some schools were a health risk. When data was last collected, in the 2012-13 school year, the average school was found to be 44 years old. High-poverty schools – those with more than 75% of students receiving free or reduced-price lunches – were typically older, closer to 50 years old. This is important as aging school buildings are more likely to have problems with air quality, asbestos and a variety of of other environmental toxicants. The National Center for Education Statistics estimates that 19% of schools have “unsatisfactory” ventilation.

Bringing U.S. school buildings up to acceptable standards would cost US$145 billion annually, according to the National Council on School Facilities. This compares to $99 billion average yearly spending on K-12 facilities – leaving an annual gap of $46 billion.

Students attending aging, inadequate schools are more likely to be low-income minority students. This isn’t a new problem. Back in 1996, the General Accounting Office released a report noting that the schools in most need of repair are in cities with a minority enrollment of more than 50% and with more than 70% of the students classified as poor. Yet in a report released earlier this year, the GAO noted that per-student spending on repairs and construction remained 30% lower in high-poverty districts compared to low-poverty areas. More than 60 years on from the historic Brown v. Board of Education decision that ruled separate was not equal, Black and brown students are still not given a fair chance.

Part of the problem is how schools are funded, which typically includes large contributions from local property taxes. As a result, richer districts can more adequately fund repairs and new buildings. Inadequate facilities in city schools – often seen as a legacy of white flight post school desegregation – are evidence that low-income students of color have been left behind. Many school districts are facing pressure to reopen despite the inadequate state of school facilities to protect the health of students and teachers. Indeed, under a recent Senate proposal for school reopening, two-thirds of the $70 billion funding offer will go only to schools that reopen.

The pandemic has underscored the importance of hygienic practices. In schools, this requires reliable plumbing and clean water in fountains, bathrooms and cafeterias. Meanwhile, effective air circulation and dependable HVAC systems can help reduce airborne contaminants.

This does not portend well for the ability of school facilities designed and built from a time long past to cope with the risk of COVID-19.

Reopening facilities before concerns over the safety of buildings are allayed could also lead to excessive absenteeism for both students and teachers. As it is, poor school building conditions have been linked to students missing school.

The dilemma that returning to school poses for lower-income parents and their children is yet another example of the inequitable opportunities for students of color. These are children for whom staying at home is likely to have a larger impact on their chances of educational success. A recent McKinsey report estimates that even with advances in online learning, the likely overall loss of learning resulting from the pandemic for a middle school student will be around 7 months. But, for Black, Hispanic and low-income students the loss is greater – ranging from 9 months for Black students to 10 months for Hispanic students and more than a year for low-income students. Research from the past two decades has already shown that education achievement is associated with building age, maintenance and repairs – factors that could now affect how how and when students go back to school.

Yet, in spite of all that we know about the quality of school facilities and their impact upon the health and learning of students, schools are threatened with the withholding of federal dollars if they don’t reopen. This carrot-and-stick approach does not appear to be rooted in the best interests of the students, teachers or their families. Instead, school reopening is seemingly viewed as key to an economic recovery that might determine the political future of this country.

The Brown v. Board of Education ruling of 1954 sent Black children into hostile environments as the nation struggled with its moral compass. It appears that Black and low-income students of color might soon be sent into school buildings, some of which date from before that decision. This time, whether it is happening with their best interests in mind is at best debatable.