Amphibious Assault Ships are Not True Aircraft Carriers, But the Marines Love Them All the Same 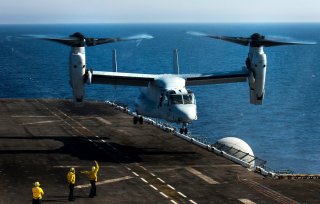 Here's What You Need To Remember: Five of the planned nine Tawara-class LHA were built from 1971 and 1980, before it was succeeded by the Wasp-class, which first entered service in the late 1980s. These LHA's have provided the Marine Corps with a means of ship-to-shore movement by helicopter in addition to movement by landing craft.

With its long flight deck and the ability for aircraft to take off and land, it would be easy to think that vessels such as the USS America (LHA-6) are "aircraft carriers." However, looks can be deceiving and there is far more than meets the eye to these warships. USS America is an amphibious assault ship – concept that dates back to the Second World War, when escort carriers wouldn't "escort" just the larger carriers but rather the landing ships and troop carriers.

The Imperial Japanese Navy's Shinshū Maru was the first to be designated a landing craft carrier and served as a proto-amphibious assault ship. Unlike the modern version of the LHA, the Shinshū Maru could only launch aircraft via a catapult to support an amphibious assault, and aircraft had to (hopefully) land on captured airfields!

During the Cold War, the British Royal Navy was the first to transform a small carrier, the HMS Ocean (R68), into an assault ship. The Colossus­­-class carrier saw service during the Suez Crisis when it was used in the first-ever large-scale helicopter-borne assault.

The United States Navy built on this concept with a special class of ships specifically built to carry up to 20 helicopters. This was the Iwo Jima-class, which bore the hull classification LPH, referred to as "Landing Platform Helicopter. These vessels could transport more than 1,700 fully equipped Marine Assault Troops into combat areas and land them by helicopter at designated inland positions.

The subsequent Tawara-class Landing Helicopter Assault, which is why even today Amphibious Assault Ships are designated LHA and not AAS. Five of the planned nine Tawara-class LHA were built from 1971 and 1980, before it was succeeded by the Wasp-class, which first entered service in the late 1980s. These LHA's have provided the Marine Corps with a means of ship-to-shore movement by helicopter in addition to movement by landing craft.

All eight of these ships are still active today, along with two of the America-class, and while the primary role is to carry about a battalion's worth of Marines, the LHA is far more versatile. But the LHA has shortcomings. All U.S. Navy Airborne Early Warning (AEW) aircraft are catapult-launched, which the LHA can't perform, and it can't project airpower ashore utilizing organic electronic warfare assets such as the F/A-18G.

The development of vertical or short takeoff and landing (V/STOL) aircraft such as the AV-8B Harrier II attack aircraft and the F-35B Lightning II have further changed the way these smaller flattops could be used.

The USS America operates with at least five Marine F-35B Lightning II fighters as well as MV-22Bs tiltrotors and CH-53 helicopters as part of a typical Maine air combat element. But it can be reconfigured as needed, carrying 16 of the F-35Bs instead – which would provide an air group on board that is essentially on par with almost any actual aircraft carrier in the world, apart the U.S. Navy's Nimitz­-class and Ford­-class or the French Navy's Charles de Gaulle.

However, while these warships are similar – similar doesn't mean the same. There are jobs that only a carrier can do, and there are jobs that the LHA can do. That is why both will likely remain floating runways for the foreseeable future and likely beyond.