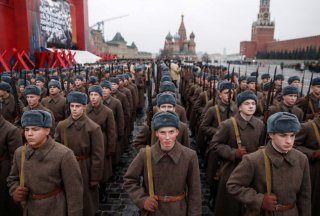 Key Point: It painted the knowable in the most aggressive manner, and the unknowable as unknowable, but unknowable in the worst possible way. Nearly 30 years later, we examine it as a cultural and historical artifact, to see if some of its more fantastical claims were true.

Many, many years ago, I was in junior high school and was deeply nerdy about military matters. Information was hard to come by in those days before the Internet, and people like me were limited to what books and magazines were available at the time.

One day I went to my local federal building to look for a particular book. It was propaganda released by the Department of Defense. Although I was in high school, I was savvy enough to know it was propaganda; it was going to be something to read just like anything else. It was Soviet Military Power.

Soviet Military Power was an annual book released by the Pentagon that explained the alleged growth and technical abilities of the Soviet armed forces. It was also an attempt to justify Pres. Ronald Reagan’s defense buildup by presenting the Pentagon’s version of the U.S.-Soviet military rivalry.

That narrative was, “We’re outnumbered, we’re outgunned, and they’re catching up on our technological lead.” It was a call to action.

Soviet Military Power was — for the most part — a carefully thought out piece of propaganda. It painted the knowable in the most aggressive manner, and the unknowable as unknowable, but unknowable in the worst possible way. Nearly 30 years later, we examine it as a cultural and historical artifact, to see if some of its more fantastical claims were true.

The title of Soviet Military Power’s chapter on nuclear weapons is not “Strategic Nuclear Warfare” or “Strategic Nuclear Defense,” but the aggressively loaded “Forces for Nuclear Attack.” The chapter introduction states that Soviet strategic policy had three overarching wartime missions:

- seize and occupy vital areas on the Eurasian landmass; and

- defend the Soviet states against attack.

The first two missions sound downright scary if you accept the narrative that the purpose of Soviet nukes is to attack. The order of the third mission is obviously no accident — the Soviet Union’s “Forces for Nuclear Attack” sound a lot less menacing if the first reason they have them is to defend the Soviet Union. It’s Soviet Military Power’s most Strangelovian moment.

Another curious aspect of the book is something the Soviets themselves inadvertently contributed to: when comparing everything from submarines to main battle tanks, there are almost always far more of the Soviet type than the American. For example, there are 10 types of Soviet long-range nuclear missiles listed, from the older SS-11 to the brand-new (at the time) SS-25. Against that are only four American missiles, from Titan II to the new MX.

Soviet Military Power could have explained all of this, but chose not to.

One of the most obvious examples of a pitch job is Chapter III: “Strategic and Space Defense Programs.”

The chapter is a rundown of Soviet advances in anti-missile defense and military space programs. At the time, the Pentagon was beginning to spend huge sums of money on the Strategic Defense Initiative. Derided by its critics as “Star Wars,” SDI envisioned using space and ground-based lasers to shoot down incoming Soviet nuclear missiles. Not surprisingly, Soviet Military Powerhad a few things to say about the state of similar Soviet programs in progress.

On page 44, it predicted that, “The strategic defense laser is probably in at least prototype stage of development and could be operational by the late 1980s.” On the same page, it said of anti-satellite lasers, “in the late 1980s, (the Soviet Union) could have prototype space-based laser weapons for use against satellites.” It went on to imply that there were working anti-satellite lasers at the Soviet research complex at Sary Shagan.

In 1989, as the Cold War was winding down, a team of Americans including physicists and a member of the House Armed Services Committee traveled to Sary Shagan. Of the three lasers at the facility, the most powerful was only able to generate a two-kilowatt beam — about as much as a sunbeam.

“It seems to me it pretty clearly is not a power laser and doesn’t represent any threat as a weapon,” said Rep. Jim Olin, a former electrical engineer for General Electric who toured the facility.

Soviet Military Power also claimed that the Soviets were building lasers mounted on aircraft. Says, the book: “The Soviets are also developing an airborne laser. Assuming a successful development effort, initial deployment could begin in the early 1990s.”

The United States had its own airborne laser program, begun after the Cold War. The program was the result of the difficulty the United States and its coalition allies had with Scud missiles during the Gulf War. The Airborne Laser, known as YAL-1, was designed to loiter near short-ranged tactical ballistic missile launching areas and shoot down missiles that had just taken off.

In reality, the laser system — packed into a Boeing 747 aircraft — was fussy and never worked to a practical extent. After 16 years and $5 billion, the project was shut down in 2011. It goes without saying that if the U.S. Air Force could not make airborne lasers a reality in 2011, there was no possibility the Soviets could have deployed a working system in 1992.

Soviet Military Power devoted more than a page of beautiful, full-color graphics of what was termed the “Soviet Space Shuttle.” The Soviet shuttle, as far as anyone knew at the time, looked identical to the American shuttle and was strapped to an Energia rocket to help it reach orbit. In one illustration, the Soviet shuttle is floating through space, about to dock with the Mir Soviet space station.

Yet the actual text of the book is curiously lacking substantive claims about the Soviet shuttle. The most direct statement is “The Soviets are currently developing a version of the U.S. Space Shuttle.” That’s it. There’s nothing else.

The reality of the Soviet shuttle was far less glamorous. Unfortunately for the Soviet Union, it did develop a version of the U.S. Space Shuttle. The Soviet shuttle suffered from all of the problems of the American original, including lengthy launch preparations, extremely complex systems and a high operating cost. The project was scaled back after a less than successful demonstration flight and canceled entirely with the dissolution of the Soviet Union.

Ambition to win the Space Race, a lack of intelligence about the other side and worries that the loser would be at some strategic disadvantage meant that an unsuccessful American shuttle program had spawned an equally unsuccessful Soviet shuttle program, which in turn prompted the Americans to call for even more spending on their shuttle program.

One has to wonder, how many times over the course of the Cold War, this happened with similar space and military programs.

All nations produce propaganda. Not all of it is bad. As an attempt to tell the Pentagon’s side of the story, Soviet Military Power at times went off the deep end, but it was not entirely bad.

The Soviet Union was in fact a large, totalitarian, ideologically hostile state that did terrible things, and it was good to have the American military ready to oppose them. Much of the content of Soviet Military Power is essentially truthful and presented in good faith, but in the pursuit of funding for defense programs, the Pentagon was at times too willing to pass on inflated claims of Soviet intentions and capabilities. While the Pentagon was trying to build minor Soviet laser programs into an ominous threat, the truth was the Soviet Union was just six years from total collapse.

As the United States pivots to Asia and China comes into focus for many as a potential adversary, we would be wise to consider the unpublished lesson of Soviet Military Power.