Another Korean War Would Not End Well For Anyone 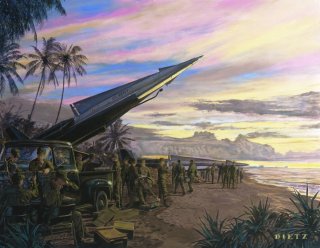 Here's What You Need to Remember: The Korean DMZ is almost certainly the most heavily armed place on Earth, and in the event of war, North Korea’s plan is to use overwhelming firepower and speed of action to conduct a “One Blow Non-Stop Attack."

The defection of a North Korean soldier across the demilitarized zone (DMZ) that separates the two Koreas highlights how difficult it is to cross from one Korea to the other. Fenced, mined, and patrolled by soldiers from both sides, fortifications and large concentrations of combat-ready troops will make the Korean DMZ in the event of war the deadliest place on earth.

The current demarcation line between North and South Korea was settled by the Korean Armistice Agreement of July 1953. The two sides agreed on a demilitarized zone approximately 2.5 miles wide approximately 160 miles long, bisecting the peninsula. Technically there is no “border,” as neither Korea really considers the other Korea a separate country, and so the DMZ has become the de facto border. Although the DMZ is commonly referred as following the thirty-eighth parallel line, it actually falls beneath the thirty-eighth parallel in the west and goes above it in the east.

Once war begins the KPA’s three forward infantry corps, the I, II, and IV Corps, supported by independent light infantry brigades and the 620th and Kangdong Artillery Corps, would launch a lightning attack across the DMZ. Also in support would be KPA Air Force fighters, helicopters and fixed-wing aircraft flying commandos, paratroopers and saboteurs south of the border, and amphibious assaults on tactically significant South Korean islands and coastal areas. KPA submarines would fan out to deploy naval commandos and intercept ROK Navy and U.S. Navy forces, particularly amphibious forces poised for a counterattack.

North Korean heavy-artillery units such as the 620th and Kangdong Corps would fire from protective positions known as Hardened Artillery Sites, or HARTS. Dug into mountainsides and frequently protected with concrete casements, HARTS are designed to provide an elevated perch from which heavy artillery can fire their guns south in support of an invasion—or conduct terror attacks on Seoul. The sites allow North Korean artillery to launch their deadly artillery strikes and then retreat into the bowels of a mountain, hillside, or rough terrain to hide from U.S. and South Korean aircraft, artillery, and missiles. Many HARTS sites have already been identified, but undoubtedly some will remain undetected. Their ability to target civilians makes them a number-one priority in wartime.

Meanwhile, south of the DMZ, South Korea too has extensive defenses designed to stop an army from crossing the border. Republic of Korea Army troops regularly patrols the border, inspecting it for signs of infiltration, with heavy machine guns and other support weapons overlooking key areas. (ROK soldiers patrolling in the DMZ are considered “armed police” and not “military,” a distinction without a difference but within the letter of the armistice agreement.) In 2010, the SGR-1 armed border sentry robot began patrolling the DMZ, reflecting the high manpower costs associated with covering the entirety of the 160-mile-long zone.

If the North stages a cross-border attack, Southern troops would attempt to stop KPA forces as close to the border if possible. Seoul is a mere half hour’s drive from the DMZ, and urban sprawl means even a minor penetration would reach the outskirts of the city. ROK forces at the border would be outmanned but perhaps not outgunned, as KPA military technology lags far behind the south. Southern forces would throw everything they had at the enemy crossing the DMZ, and the amount of firepower traded north/south in some sectors could easily equal the fighting on the Somme or D-Day.

In any cross-border attack, the longer it takes for the KPA to win, the more likely it is the United States and South Korea will prevail. An extended offensive means more time for the ROK military to call up reserves and, perhaps more importantly, more time for American air, ground, and naval units to arrive and through their weight into the fight. In response, part of the KPA’s battle plan is to attack airfields, ports, and other points of entry into the peninsula, sealing it off from reinforcements and giving time for the frontline combat units to win the war.

This article first appeared in November 2017. It is being reprinted due to reader interest.