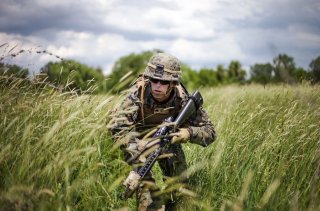 Here's What You Need to Remember: To be sure, the Vietnam War offered plenty of opportunities for moments of unfathomable bravery, and Ashley’s actions on that fateful night 53 years ago make up for just one story of valor.

Some 53 years ago, in a faraway Special Forces camp in southeast Asia, Sergeant First Class Eugene Ashley Jr achieved immortality during one of the fiercest battles of the Vietnam War.

Ashley joined the Army in 1950. After finishing boot camp and Advanced Infantry Training, Ashley went to Germany. When the Korean War broke out in 1953, Ashley deployed in Korea with the 187th Regimental Combat Team. Then, for a brief period, Ashley got out of the Army and was placed in the Inactive Reserves. A few months later, he reenlisted and was assigned to the 82nd Airborne Division. Up to that point, Ashley had trained in numerous military occupational specialties, including as an infantryman, ambulance driver, anti-aircraft ammunition handler, heavy weapons specialist, and parachute rigger; he had also held leadership positions at the squad and company level.

Ashley’s arrival to Vietnam coincided with the Tet Offensive, which began in January 1968 and would last till September. During Tet, the NVA and Vietcong took US and South Vietnamese forces by surprise and attacked several large cities throughout South Vietnam, including the capital Saigon where they briefly penetrated the US Embassy.

Once in country, Ashley found his way to the large Marine Corps base at Khe Sanh, which was under siege by the North Vietnamese. Although the majority of the NVA and Vietcong attacks during the Tet Offensive were quickly dealt with, the siege of Khe Sanh continued for months. Carrying morbid similarities with the Siege of Dien Bien Phu, where the French were defeated by the Vietminh in 1954 and were forced out of Indochina, the fighting at Khe Sanh drew international attention.

Close to Khe Sanh was the Lang Vei Special Forces Camp, which was just a mile-and-a-half from the border with Laos. Green Berets stationed in Lang Vei were no foreigners to NVA attacks. Artillery and sniper fire was a pretty common occurrence even before the Tet Offensive. But what was coming next was not common at all.

On the night of February 6, the NVA launched a tank assault on the Special Forces base. Radioing Khe Sanh for assistance, the Marines there couldn’t believe that NVA armor was within the Lang Vei perimeter—this was the first time the NVA had used tanks in force. During the initial hours of the battle, Ashley coordinated airstrikes and mortar and artillery fire in support of his fellow Green Berets in the camp. Then, seeing that reinforcements from Khe Sanh weren’t going to reach the overran camp in time, Ashley and other Green Berets took matters into their own hands.

Ashley hastily organized a relief force comprised of Special Forces operators and partner forces and led them to the nearby camp. In the ensuing hours, Ashley would lead five assaults against NVA tanks and heavy infantry. Time after time, Ashley led by example and destroyed numerous enemy positions. The fifth assault, however, would be his last.

Ashley’s Medal of Honor citation offers a glimpse of his actions on that fateful night.

“During his fifth and final assault, he adjusted airstrikes nearly on top of his assault element, forcing the enemy to withdraw and resulting in friendly control of the summit of the hill. While exposing himself to intense enemy fire, he was seriously wounded by machinegun fire but continued his mission without regard for his personal safety. After the fifth assault he lost consciousness and was carried from the summit by his comrades only to suffer a fatal wound when an enemy artillery round landed in his area. Sergeant Ashley displayed extraordinary heroism in risking his life in an attempt to save the lives of his entrapped comrades and commanding officer. His total disregard for his own personal safety while exposed to enemy observation and automatic weapons fire was an inspiration to all men committed to the assault. The resolute valor with which he led five gallant charges placed critical diversionary pressure on the attacking enemy and his valiant efforts carved a channel in the overpowering enemy forces and weapons positions through which the survivors of Camp Lang Vei eventually escaped to freedom. Sergeant Ashley’s conspicuous gallantry at the cost of his own life was in the highest traditions of the military service, and reflects great credit upon himself, his unit and the United States Army.”

To be sure, the Vietnam War offered plenty of opportunities for moments of unfathomable bravery, and Ashley’s actions on that fateful night 53 years ago make up for just one story of valor.

In 2012, Sergeant First Class Eugene Ashley Jr. was inducted into the Special Forces Regiment’s Hall of Fame as a Distinguished Member.