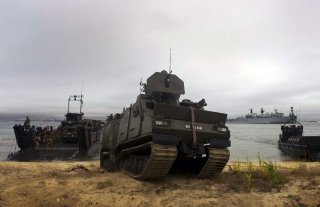 Key Point: Australia is getting into robot military vehicles.

It is joining a host of nations that are developing or have even deployed armed autonomous patrol vehicles, robot trucks and even remote-controlled tanks. The club includes the United States, Russia, China, Israel and various European nations.

But of them all, robotic combat vehicles may make the most sense for Australia.

“Greater reliance on autonomous systems and unmanned platforms makes a great deal of sense, given the small size of our military,” says Malcolm Davis, a senior analyst at the Australian Strategic Policy Institute.

Those worried about robot tanks roaming the outback can rest easy for now. “There are currently no plans to automate the Boxer vehicle,” the Australian Department of Defense replied in response to questions from the National Interest. The ADF is currently focusing on three areas: persistent autonomy to design systems that can function amid the chaos of combat, human-autonomy teaming so that humans and robots can work together, and—perhaps most important—machine cognition.

Machine cognition is “how to make autonomous systems smart enough to operate in military environments. This entails research into machine learning, artificial intelligence, symbolic reasoning, planning, theory of mind, social agents, and complex decision-making,” according to the Australian military.

That’s broadly in line with what other advanced nations are doing. For now, at least, no nation is planning—or is disclosing if in fact it is—building an army of killer robots that fight independent of human control. But Russia has its remote-controlled Uran-9 unmanned ground vehicle, a tank-like machine that saw combat in Syria, though with poor results. The U.S. Army is developing kits that can convert tanks and trucks into autonomous vehicles, while even little Estonia has developed a missile-armed robotic tank killer.

So why are robots so important for Australia? Because of Australia’s peculiar circumstances: a vast continent, with a relatively small population clustered on the coasts, and with a relatively small military. Then add to that mixture Australia’s role as a Pacific power that uneasily rubs shoulders with China, a regional South Pacific power with interests in places likes Indonesia and New Guinea, and international commitments that include troops in Afghanistan.

“I think if you look at our operational environment, where these things [robots] are likely to be used, it varies widely.” Davis says.

“If we consider their application from low-mid intensity stabilization ops in fragile states, through to potentially high intensity warfighting as part of expeditionary coalition operations, that takes in a vast range of geographies – from South Pacific through East Asia to Middle East – against a broad range of potential opponents with a diverse range of capabilities.”

Davis believes it makes more sense for Australia to team up with other nations rather than develop these robots on its own. But he sees this “as an important aspect of future ADF development.”