Anti-Semitism Is Making a Terrifying Comeback 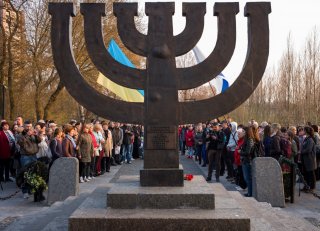 It’s the 75th anniversary of the end of the Second World War. When Japan signed the instruments of surrender on Sept. 2, 1945, it was the last of a series of notable events that took place that year.

The first was the liberation, on Jan. 27, 1945, of Auschwitz-Birkenau, the most notorious of the extermination camps operated by Nazi Germany, imperial Japan’s Axis ally.

Post-Holocaust, the fervent credo of a Jewish community that witnessed approximately six million of its numbers perish in under five years — half of all European Jews and more than a third of Jews worldwide — has been “Never again!”

● Oct. 27, 2018: A man armed with an AR-15-style assault rifle in the Tree of Life synagogue in Pittsburgh cut down 11 congregants in the worst killing of Jews in American history.

In Halle, Germany, in mid-October 2019, only an impassable synagogue door prevented a Yom Kippur bloodbath by a man armed with a machine gun and a video camera to stream the intended massacre for the world. In his online manifesto, he stated: “If I fail and die but kill a single Jew, it was worth it. After all, if every White Man kills just one, we win.”

Almost 90 per cent of American Jews currently deem anti-Semitism to be a scourge in the United States, with some hesitant to display openly their religious and cultural affiliation. A European Union survey showed the same percentage of Jews expressing the belief that anti-Semitism has very recently increased in their respective countries.

Anti-Semitism has been on the rise globally, with the last few years witnessing a surge in anti-Semitic assaults — and the rhetoric that inspires them. The antagonism is coming from the far right, the far left and Islamists.

The word “Semitic” is derived from the biblical name Shem, one of Noah’s three sons. The “Shemitic” peoples are found throughout the Middle East, with the largest constituent group being Arabs. But “anti-Semitism” has always applied only to Jews within the larger Semitic population group.

The animus towards Jews has its roots in the first century of the Common Era (a major contributor being early Christians’ hostility towards their parent religion for refusing to accept Jesus of Nazareth as the long-awaited Jewish Messiah).

The term “anti-Semitism,” though, appears only in the second half of the 19th century. It was coined in Germany (“Antisemitismus”) in the 1879 work Der Sieg des Judenthums über das Germanenthum (The Victory of Judaism Over Germanism) by journalist Wilhelm Marr.

Against the backdrop of a burgeoning focus on nationalism in Europe, Marr sought to target explicitly the ethnicity of Jews over and above their religious and cultural identity. “Antisemitismus” would come to supplant the previous, much cruder, German term “Judenhass” (“Jew hatred”).

Following the Second World War, the expression of overt anti-Semitism was limited somewhat to the fringes of political and social discourse. But for the past few decades, European Jews have been keeping a wary and worried eye on it.

Across continental Europe, right-wing parties that have long voiced anti-Semitic rhetoric have lately been growing stronger.

In 2015, French philosopher Alain Finkielkraut, born to Holocaust survivors, was asked whether Europe had again become inhospitable for Jews. “We should not leave,” he said. “But maybe for our children or grandchildren there will be no choice.”

In 2017, anti-Semitism began its latest easily visible upsurge, with Germany, France, the United States and Canada witnessing a troubling climb in violent anti-Semitic episodes the next year. B’nai Brith Canada recorded 2,041 anti-Semitic incidents across the country (11 per cent of them violent), a 16.5 per cent increase from 2017.

In Britain, anti-Semitism has permeated the left-wing Labour Party under former leader Jeremy Corbyn, prompting a number of its Members of Parliament to denounce and depart the party. In the lead-up to the 2019 general election, Orthodox Chief Rabbi of Great Britain and Northern Ireland Ephraim Mirvis castigated Corbyn and Labour. “A new poison — sanctioned from the very top — has taken root in the Labour Party,” he said.

A History of Anti-Semitism

The Jewish community, of course, has seen and experienced this poison many times.

From the first accusation of deicide in the second century (due to the false claim that it was Jews who were responsible for the death of Jesus), the blood libel, the pogroms, the dissemination of the forged document commonly called The Protocols of the Elders of Zion to the Nazi attempt to carry out Die Endlösung (“The Final Solution”), it has infused most of the last two millennia.

The poison has always surged to the surface in times of social, political and economic uncertainty — such as our current global context, now made much worse by the COVID-19 pandemic.

Despite the fact that health authorities the world over unanimously agree that the SARS-CoV-2 virus originated in China, anti-Semites have found a way to blame the pandemic itself on Jews.

Subsequent to the police killing of George Floyd in Minneapolis in May, anti-Semitism also took the form of claims on the American far right that powerful Jewish actors (supposedly led by billionaire George Soros) were inciting and guiding the Black Lives Matter protests for their own perverse purposes. This is a white-supremacist trope that dates back to the time of the American Civil Rights movement of the 1950s and 1960s.

Still, it was specifically in 2017 that the most recent spike in anti-Semitic violence started. This has naturally made analysts search for a particular fount of the poison in that year. At least with respect to overt far-right anti-Semitism, they may have found the source: the start of the presidency of Donald Trump.

Correlation is, of course, not causation, but Trump has unabashedly practised the politics of hate and division, openly courting white nationalists and stoking the resentments of the far right.

This animus has also been directed against Muslims and non-white people in general, but it was the chant of “Jews will not replace us” that echoed chillingly through the night during the August 2017 “Unite the Right” rally in Charlottesville, Va.

While anti-Semitism undeniably has its left-wing instigators, particularly in Europe, the Anti-Defamation League’s 2019 figures illustrate graphically that it is the far right currently animating animosity against Jews in the United States.

Admittedly, Trump’s Middle East policies have greatly favoured Israel. But they are due primarily to his need to please his white conservative Christian base, who see full Jewish control and settlement of the biblical land of Israel as part of their apocalyptic road map.

Although Trump has himself employed anti-Semitic tropes, he is, in reality, not an anti-Semite. He is actually a philo-Semite — in this case a poisonous one. That is, he believes all of the toxic stereotypes about Jews — Jews are greedy, Jews are bent on domination, Jews are egocentric — but he sees those traits as admirable.

But philo-Semitism can so easily be inverted and weaponized against Jews. “Wealthy” and “good with money” becomes “avaricious” and “grasping.” “Ambitious” and “organized” morphs into “scheming,” “devious” and “domineering.” Hence the sardonic Jewish adage: “A philo-Semite is an anti-Semite who likes Jews.”