Arab Spring: After a Decade of Conflict, the Same Problems Persist 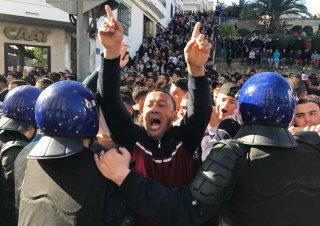 As the popular refrain of “ash-shab yurid isqat an-nizam” rang out across the Middle East in the early months of 2011, the nature of political life and relations between rulers and ruled began to fragment. The chant – which roughly translates as “the people want the fall of the regime” – became the slogan of the Arab uprisings, a wave of protests in states across the region.

The uprisings highlighted the fractious nature of political life and relations between the people and their governments, resulting in the toppling of authoritarian rulers in Tunisia, Egypt, Libya and Yemen.

But these were limited victories – and protesters elsewhere were not as successful. Over the course of the following ten years, close to 1 million people have been killed and more than 10 million displaced from their homes. The protests revealed a profound political crisis that continues to resonate across the region. And in most cases, the issues that provoked the protests – economic inertia, a lack of political accountability, rampant corruption and a growing gap between rich and poor – continue today.

Triggered by the self-immolation of Mohammad Bouazizi, a Tunisian street vendor, the protest movements emerged from longstanding frustration at the economic conditions facing many across the region, fuelled by endemic corruption. With a burgeoning youth population facing serious obstacles to employment, the opulent wealth of those in power and unwillingness to offer even token reforms meant that latent frustrations erupted in protests from Tunis to Muscat.

The responses of regimes varied across the region, ranging from token reforms in Oman, which involved the removal of unpopular ministers, and economic incentives designed to engender support in the other Gulf states, to more draconian strategies deployed elsewhere. This included the use of emergency powers, detention, torture, the closing down of space for political engagement, citizenship revocation and death. In Syria, Libya and Yemen, the violent repression that followed protests culminated in the onset of devastating conflict that continues today.

Developments in Tunisia and Egypt initially offered hope to many following the toppling of the authoritarian regimes of Ben Ali and Hosni Mubarak. But in Egypt, the coup d’etat that toppled Mubarak’s successor, Mohamed Morsi – the country’s first democratically elected president – reflected broader regional trends of regimes using mechanisms of control to prevent the emergence of protest movements, seemingly crushing the dreams of protesters in the process.

One of the most common strategies was the manipulation of sectarian strife, which saw regimes capitalise on social divisions for their own ends – a form of “divide and conquer”. The repercussions of such processes were devastating. The increased divisions within – and between – states may have arisen from sectarian differences but were manipulated by political self-interest by elites seeking to secure their position in the face of a range of serious challenges.

In Syria, members of violent Sunni Islamist groups who were in jail were released by Bashar al-Assad in an attempt to frame the struggle against the Arab Spring protesters as a fight against Islamic extremism. Similarly, in Bahrain, the government sought to frame protesters as “fifth columnists”, doing the bidding of Iran – albeit with very little evidence to support such claims.

In pursuit of this, key regime officials spoke of nefarious Iranian involvement supporting protesters by providing arms and training. After Bahrain’s protest movement was defeated, King Hamad declared that an “external plot” had been foiled, with a clear nod to Iran.

In the years that followed, acts of protest became more isolated as regimes cracked down on oppositions. In Bahrain this involved the revocation of citizenship from 990 Bahraini nationals while elsewhere – in other Gulf states and Egypt – it resulted in increasingly draconian terrorism laws designed to prevent both violent extremism and challenges to regime power. In the years after the protests, the spectre of war in Syria loomed large – an example regularly used by those in power across the Gulf to caution against demands for democracy.

The years after the uprisings were largely shaped by this broader struggle for survival and efforts to reassert sovereign power in the face of shifting national and international pressures. At the same time, many of the structural factors that had caused the protests of 2011 remained unresolved.

This unwillingness to address underlying social, economic and political factors is hardly surprising. It reflects decades in which such grievances have remained unresolved, prompting often violent confrontations between rulers and ruled over the nature of the state and its resources.

Moments of unrest punctured the region across the 20th century – leaving aside interstate conflict – predominantly emerging from the ability of rulers to address underlying grievances around social, economic and political issues. Processes of infitah (economic liberalisation) took place as part of a broader global move towards neoliberal agendas during the 1980s.

But across the Arab world rising birth rates, institutional weakness and bureaucratic ineptitude left a gloomy picture of unbalanced development and systematic exclusion. This was often exacerbated by regimes becoming extractors rather than distributors – leaders and their coteries taking out money from state resources for personal needs and desires – leading to widespread failures of governance. By 2004, a UN report titled Towards Freedom in the Arab World referred to the Arab “state” as a “black hole”.

The economic crisis of 2008 had a dramatic impact on the Middle East. At the height of the crisis, Saudi Arabia lost a range of contracts worth US$958 billion (£693 billion) while the UAE lost US$354 billion in contracts.

Estimates of a further US$247.5 billion in capital flight from the Middle East only exacerbated these challenges. The impact on people was devastating. By 2011, the situation was dire: 41% of people across the Middle East were living in need.

Underpinning this was the loss to economies across the region caused by the endemic corruption, which some estimates put at around US$1 trillion in the five decades leading up to the Arab uprisings.

It was hardly surprising that having faced neglect, repression and corruption over the course of the 20th century people turned to groups such as the Muslim Brotherhood, Fatah, Hezbollah and Hamas. Many of these groups, as well as political and sometimes paramilitary activities, engaged in huge social welfare programmes and accrued a great deal of popular support as a result.

Over the years that followed, structural grievances that had triggered the protests in 2011 once again rose to the surface. But this time they were played out across an increasingly divided region beset by sectarian schisms and geopolitical rivalries, frustration with political elites, and – most recently – exacerbated by COVID-19.

By 2015, 53% of the region’s population required financial support from non-state actors. In Lebanon and Iraq, protesters took to the streets in 2019 articulating their frustration at the status quo. It is hardly surprising that widespread anger has resulted in further instances of protest across the past decade, driven by anger at many of the same issues. Understanding the roots of the protest movement and their evolution are essential in gaining awareness of the region’s trajectory into a new decade and under a new US administration.

The root causes of the protests remain unaddressed – and the situation may have even deteriorated as economic crises are worsened by the pandemic. While turning towards authoritarianism has given regimes additional measures to regulate life, until these deeper political issues have been addressed, latent frustrations will result in intermittent acts of protest and broader processes of repression.