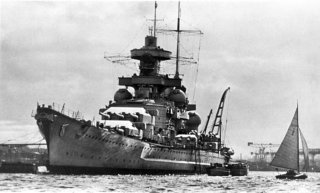 Here's What You Need To Remember: The more numerous and powerful radars on Force 2’s Duke of York finally picked up the Scharnhorst twenty-five miles away after 4 p.m. Her sole forward radar knocked out, and nightfall and blizzard decreasing visibility, Scharnhorst was blind to the powerful British force barreling towards her from the west. Force 2 finally opened fire at six-miles range.