Are Russia and Ukraine Headed for a War? 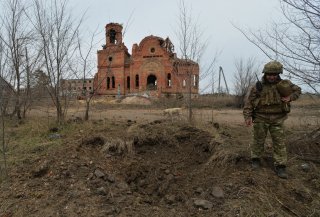 Reports that Russia has been moving large numbers of troops and military hardware towards the Ukrainian border have raised fears of a new escalation of violence in the region. Kyiv has accused Moscow of aggravating the security situation in Ukraine’s south-east. The Kremlin, meanwhile, has claimed that all Russian troop deployments have been defensive and do not pose a threat to anyone.

To understand the current situation, it is important to understand what happened in eastern Ukraine’s Donets Basin (Donbas) seven years ago. On April 13 2014, a clash between armed men and Ukrainian security forces near the town of Sloviansk led to the first casualties of a war which, according to UN estimates, has now cost more than 13,000 lives.

In recent years, the intensity of fighting has decreased, but lasting peace has remained elusive. In 2020, the Ukrainian side still recorded 104 deaths along the frontline of hostilities.

Just like the statements about the latest Russian troop movements, the debate on the causes of this war is dominated by two diametrically opposed narratives. Ukraine’s political leadership claims that the war was a Russian invasion in response to the removal of Ukraine’s pro-Russian former president in the February 2014 “Revolution of Dignity”. Russia, meanwhile, denies any involvement and claims that the war is an internal conflict between the Ukrainian military and the people of the Donbas, sparked by what the Kremlin habitually refers to as a “coup d’état” in Kyiv.

Assessments by academics are more nuanced but show a similar divide. Some scholars emphasise the part played by domestic Ukrainian factors as a cause of the conflict while others emphasise Russia’s role. A collection of articles by different authors that I recently combined into an edited volume illustrates this with reviews of this debate and examples of the arguments from either side.

My own research is attempting to establish whether domestic tensions or Russian intervention were the primary cause of the Donbas war. My recent article in The Soviet and Post-Soviet Review – a peer-reviewed academic journal which is published by Brill and focuses on the history of the Soviet Union and its successor states – is a first step in this direction. I looked at a dataset of reports from different news websites that covered events as they happened. I found that the best way to analyse the conflict without getting bogged down in the different propaganda narratives is to focus on the details of specific events one step at a time.

By searching for specific keywords in my dataset, I reconstructed the sequence of events that moved the Donbas from a state of relative calm in early 2014 to a full-scale war in August. This sequence consists of six key episodes that had a lasting impact on the course of the war. They are shown in the graphic below.

All of the parties to the conflict largely agree on this basic course of events. Nobody disputes that these episodes occurred or that they played an important role in the conflict. Reporting only diverges when it comes to the details of the events and the way in which various actors are portrayed.

For example, reports hardly ever disagree that armed clashes took place in a certain place at a certain point in time. What they disagree on in virtually all cases is whether the people fighting against the Ukrainian security forces were ordinary locals or mercenaries under the command of the Russian military.

Details like these are at the heart of the confusion about what is going on in Ukraine. So it makes sense to approach the key episodes one by one, rather than getting lost in overarching narratives.

For each of the six steps in the war’s original escalation sequence, I am trying to establish whether it was primarily the result of domestic factors or because of Russian intervention. For the final step, most of this analysis is already complete and the results have been published online.

An investigation by the Forensic Architecture research agency, in which I participated, gathered and verified a large volume of open-source evidence for Russian military presence in eastern Ukraine in late August 2014.

We presented this evidence on an interactive online platform. It consists, for example, of footage showing captured Russian soldiers and tank models used only by the Russian army. It also includes Google Earth satellite imagery showing large convoys moving through Ukrainian territory in the area between the battlefield and the Russian border.

These findings show that the Ukrainian defeat in August 2014 was primarily the result of Russian intervention. This does not necessarily mean that Russia is about to launch a new offensive now, but it does mean that Ukraine has reasons to be concerned.

This step-by-step approach to researching the events of 2014 might also be useful in analysing the current situation. Rather than wasting energy on long-winded arguments about why Russia may or may not launch an offensive, it might be more useful to focus on the details of events on the ground and to make contingency plans based on the location, scope and speed of the current troop movements.

Where and with how many troops could Russia attack? What concrete measures could be taken to dissuade Moscow from escalating the situation further? And what could be the response in case an attack happens after all? Given the grave consequences of a new Russian offensive against Ukraine, the international community needs to have answers to these questions, regardless of the likelihood of such a scenario.