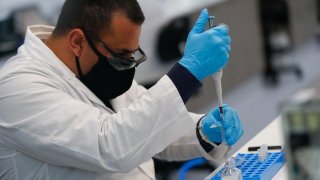 What will education look like this fall as public and private schools work to teach kids while also keeping the public safe? How will the economy recover from the losses of Q2? And when can we expect a vaccine? To discuss these questions and many more, Scott Gottlieb, Rick Hess, and Michael Strain all join in this special episode of Political Economy.

Scott Gottlieb is a resident fellow at AEI, and he is also the former commissioner of the Food and Drug Administration. Rick Hess is a resident scholar and the director of Education Policy Studies at AEI, and he is the author of several books, including “Letters to a Young Education Reformer” and “Breakthrough Leadership in the Digital Age: Using Learning Science to Reboot Schooling.” And Michael Strain is the John G. Searle Scholar and director of economic policy studies at AEI. He is also the author of “The American Dream Is Not Dead: (But Populism Could Kill It).”

Pethokoukis: Let’s start with you, Rick. How prepared are schools to go fully remote and online this fall? It seems like more and more every day are. Are they ready?

Hess: None of the 15 biggest school systems have said they’re going fully remote when school starts. Most of them are not ready. There’s little reason to think that anything is going to be much better than it was in the spring.

How did it go in the spring?

Hess: Pretty poorly. The Census Bureau reported that the average student got about 3.8 to four hours of instruction a week. Parents reported feeling overwhelmed. 30 percent of adolescents reported feeling depressed, isolated. We saw huge problems in terms of children’s general wellbeing. The estimates are that we saw unprecedented fall-offs in reading and math attainment. And that was after students had spent six months in school with their peers and getting to know their teachers. When kids show up for fourth grade or tenth grade this fall, they’re going to know their teachers — and their teachers are only going to know them — as pixels and an email address, leading to some grave concerns about how it’s actually going to play out.

All right. Here in Northern Virginia when one of the counties announced they were going online they said, “Don’t worry, parents. We’re creating a robust online learning platform.” Is that just a phrase that means “more Zoom”?

Another example: Arlington, Virginia last spring explicitly told teachers not to teach any new content, because they couldn’t figure out how to deliver it universally or uniformly. So the reality is that a lot of these emails and notes being sent home from schools about their “robust, rigorous, highly articulated online presence” basically just say, “We’ve got some stuff online. How about it?”

What is your best guess, over the course of this year, of what share of children will be going to school in person in the United States?

Hess: Hugely hard to guess. I’ll be curious to hear what Scott has to say about the path of the coronavirus during this year. It looks like we’re going to start with — right now, we have really ugly, incomplete numbers — maybe 20, 30 percent of kids are going to be showing up this fall for at least a hybrid, a part time in-person experience. Depending on the course things take, you could imagine that being over half of students by spring. You could also imagine it going the other direction.

Scott, about the path of the virus: Just before we started the event I went and I checked one of the more accurate computer models and it predicted between now and November 1 another maybe 25 million infected in this country, maybe another 75,000 fatalities. It still seems like it’s pretty bad. Are those numbers sort of baked in or is there anything we can do?

Gottlieb: I think it’s really hard to predict beyond really a month on any of these models, because there’s so much there’s so much variability and so many things that are going to happen behaviorally that are going to impact the epidemic. I think over the next month what we’re likely to see is a slowing in the Sunbelt states. Texas and Arizona are already showing signs of slowing. Florida and California will probably show more unmistakable signs of slowing in terms of number of new cases. Maybe the hospitalizations will start to decline. You’re seeing that already in Arizona and Texas, although the reporting on hospitalizations is very spotty right now. Now that HHS has changed the reporting requirements, a lot of states haven’t been able to report accurately. But the problem is that you’re going to see other states heating up as the Sunbelt starts to cool down.

So it’s similar to what happened with New York. When you looked at the national trends as New York was coming down in its epidemic curve, it looked like nationally the epidemic was slowing at first, and then sort of plateauing at around 20,000 infections a day. But New York was such a big initial component of the overall infection in the country that when you backed out, you actually saw an epidemic that was accelerating around the country. But New York was declining faster than the rest of the country was reseeding up, and so overall it looked like there was a flat trend line.

I think you’ll likely see something similar here, where we sort of peaked at 70,000 infections. We’ll maybe come down to 45–50,000 infections a day as the southern states start to decline, but what you’ll see is infections picking up in other parts of the country. And so we’ll never really get below 45,000–50,000 infections. We’ll kind of get down there, touch that bottom, and then make a new high — similar to what happened with the first wave of this epidemic, where you sort of got up to 45,000 or 40,000 infections, it came down to 20,000, plateaued there, and then went back up to 60,000. We’ll make new highs and higher lows, if you will, in terms of where we are with the infection. I think that’s the risk right now.

And when you look around the country, Kentucky has a very big epidemic. Missouri, Ohio, Illinois, Tennessee — it looks like they have a big epidemic underway. Alabama, Louisiana, and South Carolina never really got out of it. Obviously the overall contribution of small states is smaller than something like Texas and Florida and California simultaneously. But when you start to add them up, the Midwest looks like it’s in trouble.

You mentioned that infections dropped down, maybe around 20,000, now they’re back up, and people are trying to know what happened. Is it just that we reopened too soon? Was it protests? Whatever the reason was, it sounds like as long as infections are that high, you’re just asking for another outbreak somewhere. There’s too much virus out there, and people are just too mobile, and unless you really tamped down those numbers, other flare-ups are just inevitable.

Gottlieb: I think that’s right. I think we just have a lot of infection around the country and it’s inevitable that there’s going to be reseeding. As much as some states think that they can create restrictions on travel in and out of state, you’re never going to really effectively be able to do that. And the states that right now have brought their infection way down are getting reseeded. They just don’t know it right now. And those chains of transmission are being lit and some of them will end up being outbreaks within a month or so. You’re going to start to see outbreaks emerge in some of the states that have been relatively quiescent — that either had good control of this all the way through or got good control of it, like Connecticut, the state I’m in.

So we just have too much infection around this country. And we don’t really have a uniform approach, so you can’t simultaneously snuff it out. We have state-led efforts, state policies that are disparate. And so you’re having state-led policy efforts with regional effects in this country, as opposed to a more consistent approach. And I don’t know you’re ever going to get to a more consistent approach at this point. I think that there’s an inevitability to the situation we’re in right now, just from a sort of policy and political and practical standpoint.