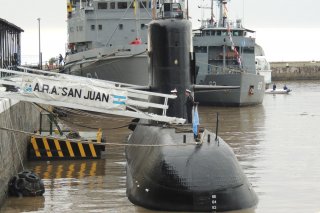 Key Point: She fired three torpedoes. If one had hit, history would remember the Falklands war very differently.

The export-only Type 209 submarine was designed in the 1970s as a small, affordable submarine alternative for countries that could not afford, nor had the need, for large and expensive American or Soviet submarine designs. Though the 209 design is quite small when compared to other nuclear-powered submarine designs, it is quite capable and has been widely exported to countries that lack a domestic submarine manufacturing industry.

The Type 209 design created by, Howaldtswerke-Deutsche Werft of Germany, uses a streamlined single-hull design powered by four diesel engines that charge the sub’s battery cells when surfaced. Submerged, the Type 209 can achieve a respectable 23 knots or about 26 miles per hour. From the periscope, the commander can view the entire length of the submarine, which has a relatively small crew complement of just 36.

Type 209 enjoyed considerable success as an export sub on the international submarine market. Five main variants have been developed for 14 different countries, leading to some variation between hulls optimized for different naval requirements. One type 209 was even built as recently as 2008. Though the class is too small to house vertically-launched missiles, its eight torpedo tubes can fire surface-attack missiles modified for torpedo tube launch.

The South Korean Type 209 submarine variant, called Chang Bogo-class after a Korean sailor and explorer, is one of the most advanced of the Type 209 variants. The parent Type 209’s lead-acid batteries were swapped out for higher capacity lithium-ion batteries which extend the Chang Bogo’s range and underwater endurance.

In addition to standard 21-inch torpedoes, the Chang Bono-class can attack surface targets with American Harpoon missiles. These harpoons are fired from the sub’s torpedo tubes inside watertight containers that launch the missile into the air once contact with the surface has been made. Besides Germany, South Korea is the only other country that has put their license-built Type 209 variant for sale internationally, a deal that was picked up by the Indonesian Navy in the mid-2000s.

One of the few times the Type 209 was used in anger was during the Falklands War, when an Argentinian Type 209 fired at a British aircraft carrier. Amazingly the Argentinian submarine got to within 7,000 meters of the British surface fleet without being detected and fired three torpedoes. However, due to faulty gyroscopes and improperly installed guidance wires, the torpedoes veered wildly off course, missing their target. Had they not missed, the course of the Falklands War could potentially have been much different.

Though the class has since been supplanted by other more modern German designs, such as the Type 214 class, the 209 class is nonetheless still a capable platform, especially for countries that cannot manufacture their own submarines and are in need of a moderately capable platform on the cheap. These cost-effective and capable attributes are reflected by the class’ surprisingly wide export success, particularly in Latin America.