Armed With Nuclear Missiles, the Ohio-Class Submarine is a Real Killer 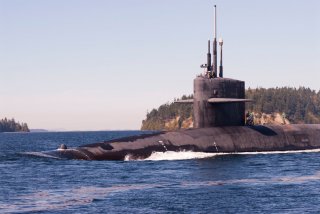 Here's What You Need To Remember: With estimated costs of $4–6 billion each to manufacture, the next-generation boomers may be fewer in number and will use new reactors that do not require expensive overhauls and refueling, allowing them to serve until 2085.

In the event of a nuclear exchange, a boomer would likely receive its firing orders via Very Low Frequency radio transmission. While a submarine’s missiles are not pre-targeted, like those in fixed silos, they can be assigned coordinates quite rapidly. The first eight Ohio-class boats were originally built to launch the Trident I C4 ballistic missile—an advanced version of the earlier Poseidon SLBM. However, by now all of the boomers are armed with the superior Trident II D5 ballistic missile, which has 50 percent greater range and is capable of very accurate strikes, which could enable them to precisely target military installations as a first-strike weapon.

While other branches of the military may be deployed in reaction to the crisis of the day, the nuclear submarines maintain a steady routine of patrols, and communicate infrequently so as to remain as stealthy as possible. Each Ohio-class submarine has two crews of 154 officers and enlisted personnel, designated Gold and Blue, who take turns departing on patrols that last an average of seventy to ninety days underwater—with the longest record being 140 days by the USS Pennsylvania. An average of a month is spent between patrols, with resupply facilitated by three large-diameter supply hatches.

Meanwhile, the New START treaty which came into effect in 2011 imposes additional limits on the number of deployed nuclear weapons. The current plan is to keep twelve Ohio-class subs active at a time with twenty Trident IIs each, while two more boomers remain in overhaul, keeping a total of 240 missiles active at a time with 1,090 warheads between them. Don’t worry, restless hawks: that’s still enough to destroy the world several times over!

The Ohio class will serve on until the end of the 2020s, and may even receive some additional acoustic stealth upgrades until they are replaced by a successor, tentatively dubbed the Columbia class. With estimated costs of $4–6 billion each to manufacture, the next-generation boomers may be fewer in number and will use new reactors that do not require expensive overhauls and refueling, allowing them to serve until 2085.