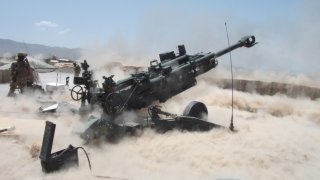 Here's What You Need To Remember: In response to these kinds of attack challenges, the U.S. Army and Raytheon are developing a new “Enhanced Shaped Trajectory” Excalibur round able to change-course in flight and reach these obscured or otherwise unavailable targets.

(Washington D.C.) Enemies of the U.S. Army are now deliberately hiding targets behind mountain ridges, under bridges, in rocky crevices and other locations intended to elude state-of-the art GPS-guided artillery round attacks -- complicating U.S. efforts to pinpoint and destroy targets.

The advent of these kinds of guided rounds brought artillery into the modern warfare era; historically, artillery was used as an “area weapon” to blanket enemy locations with incoming fire, enabling forces to maneuver. Excalibur, which was used with great success in Iraq and Afghanistan, introduced a new level of precision attack into ground combat. This not only allowed for greater stand-off distance but offered new tactical advantages to commanders seeking to eliminate targets in otherwise congested, dangerous or complicated environments.

Now, following years of combat, U.S. adversaries have developed tactics intended to thwart, stop or avoid these kinds of precision-artillery attacks, by placing assets and potential targets in areas less vulnerable to destruction by guided rounds -- such as on the other side of a mountain or beneath a bridge.

“We do have some adversaries who use reverse slope protection that challenges normal artillery, because the descending portion of the trajectory can be masked by that reverse slope,” Brig. Gen. John Rafferty, Director, Long Range Precision Fires Cross Functional Team, Army Futures Command, told Warrior in an interview.

In response to these kinds of attack challenges, the U.S. Army and Raytheon are developing a new “Enhanced Shaped Trajectory” Excalibur round able to change-course in flight and reach these obscured or otherwise unavailable targets.

“In rugged terrain, a shaped trajectory allows a modified trajectory that can enable new effects against targets. We are working with industry to see what is possible,” Rafferty explained.

Instead of being limited or confined to a standard guided-round trajectory, which descends in direct and known fashing, the “shaped trajectory” round can be pre-programmed by an observer to perform a “high-G-U-turn,” altering its course to destroy obscured or hidden targets.

“When it gets to the highest point in its trajectory, the canards are deployed and the body gives it lift and glide. Then it separates from what a conventional round looks like. With a shaped trajectory you can ‘bend that trajectory,’” Shawn Ball, Excalibur Business Development lead, Raytheon, told Warrior in an interview.

The projectile’s approach angle to the target is programmed into the round ahead of time. [BE1] The Army approached industry with an urgent requirement to deploy this technology.

“The Army came to us to go after a target that was previously unreachable. Enemies are hiding targets behind hill masses or under bridges and infrastructure,” Ball said.

In order to engineer the “shaped trajectory” round, weapons developers made software adjustments and upgrades to the existing Excalibur Ib round[BE2] .

“The projectile was fired over a mountain and then it came back toward the backside of the hillside. It acts more like a missile. The shaped trajectory is pre-programmed into the round by the crew,” Ball explained.

The Army is already using some “shaped trajectory” rounds as part of an ongoing process to explore and further develop the technology; the round is part of a family of Excalibur artillery rounds engineered by Raytheon… to include the initial Ia-1round from 2007 able to fire 20km, a subsequent 40km-range Ia-2 round and an advanced Ib round built with additional guidance and navigation technology to operate in a GPS-contested environment.​

“We are working with our Army laboratories to provide changes to material. Primarily we are working on coordinate seeking, GPS, alternative sources of navigation and target seeking, and also working toward assurance from jamming and other threats to GPS navigation,” Rafferty said.

In more recent years, Raytheon continues to work on a collection of new Excalibur rounds as well, to include a laser-guided “S” round, a variant capable of detecting and homing on targets autonomously, which includes a payload to defeat armored vehicles, and a 5” version of Excalibur for use in Navy deck-mounted 5-inch guns. Excalibur is also being fired from the Army’s emerging Extended Range Cannon Artillery (ERCA) weapons program and is the only projectile to strike a target precisely at more than 65km, as demonstrated in a March 6, 2020 test. The ERCA gun uses a longer, 58-caliber cannon to fire 155m rounds as far as 70km. Until ERCA, existing 155m Excalibur were fired from 39-caliber tubes on the US Army’s mobile M777 towed howitzer or the M109A7 Palladin self-propelled howitzer or the 52 caliber tubes on the Army’s international partners’ guns such as Sweden’s Archer, and The Netherlands’ PzH2000.