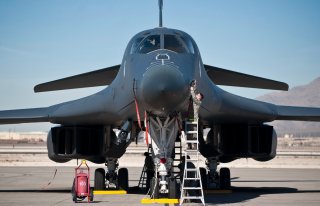 Here's What You Need to Know: Nevertheless, the “arsenal plane” concept remains innovative and exciting and has the chance to solve some of the key force structure problems that wargaming and analysis have identified.  As the U.S. increasingly pushes for longer-ranged air-to-air missiles, more opportunities for separating sensor-from-shooter-from-weapons carrier will present themselves.

If not a battle plane, then what about an arsenal plane?

The Air Force is fully aware that its fleet of stealth fighters cannot, due to the need to fly in stealth configuration, carry enough missiles to decisively defeat a larger force of 4th generation aircraft.  A RAND study of several years ago noted that China could defeat a force of 5th generation fighters by expending enormous numbers of older aircraft to force the US planes to use all of their missiles, thus exposing tankers and other infrastructure to attack.

However, advances in communications and sensor integration have made it possible for “tip of the spear” fighters to take advantage of munitions carried by aircraft away from the fray. For several years now, the Air Force has been thinking through the possibility of an “arsenal plane,” a large aircraft that would carry a variety of munitions into battle, but avoid direct combat. This is distinct from plans to equip the B-21 Raider (or any other bomber) with anti-aircraft capabilities, thus turning it into a “battle plane.” The Air Force and Navy have also examined the prospect of developing an unmanned “wingman” that would carry additional missiles that an F-35 or F-22 could fire.

The term “arsenal plane” originates from naval thinking. In the 1990s, the United States Navy repeatedly revisited the concept of an “arsenal ship” which would carry a large stock of land-attack cruise missiles, thus relieving destroyers, cruisers, and submarines of the need to carry such munitions themselves. Some argued that the arsenal ship could replace much of the punch provided by the aircraft carrier fleet. Of course, the arsenal ship never took shape, even if the idea has never quite died.

The arsenal plane is distinct from the aforementioned “battle plane” in that the platform is not intended to engage in contact with the enemy, and will always operate from well behind the scenes. This enables considerable freedom in thinking through appropriate platforms. Instead of a high-end aircraft requiring stealth and other modern defenses to survive, an older platform unsuited for sustained penetration of defended airspace will do. Rather than a B-2, B-21, or even a converted B-52 or a B-1B, for example, the arsenal plane could be an aircraft developed out of the C-130 Hercules.

The latest thinking for the arsenal plane has focused on the B-52 and B-1B, and the Air Force has already conducted some testing with respect to redesigning payload spaces in a way that could support front-line combat. Planners have also begun to consider using the arsenal plane as a truck for air-to-ground munitions, including potentially hypersonic weapons. Developing different aircraft for different “arsenal” missions would ease conversion problems, as cargo aircraft (such as the C-17 and the C-130) do not have the external hardpoints that would make them well-suited to an air-to-air mission.

Of course, loading the aircraft with more capabilities runs the risk of overloading the plane, driving up price and over-complicating the platform. Many other problems also remain. Bifurcating the mission between air-to-air and air-to-ground aircraft increases maintenance costs and training costs, as is the case with any increase in the number of platforms and missions. Moreover, the bomber force (including the B-52 and B-1B) is already overloaded with missions; B-1B readiness has fallen dramatically because of overuse. Finally, the Air Force has always struggled with difficult choices between front-line and support aircraft, and the future of the procurement budget remains uncertain.

Nevertheless, the “arsenal plane” concept remains innovative and exciting and has the chance to solve some of the key force structure problems that wargaming and analysis have identified.  As the U.S. increasingly pushes for longer-ranged air-to-air missiles, more opportunities for separating sensor-from-shooter-from-weapons carrier will present themselves. An opportunity to repurpose an old platform for a new mission always represents a potential for savings, which both the U.S. Air Force and the U.S. Navy should be attentive to.