Artificial Intelligence Is Making The Army's Armored Vehicles Deadlier Than Ever 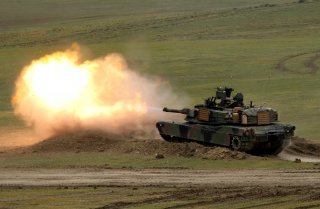 Here's What You Need To Remember: The Army and industry are currently developing algorithms to better enable manned-unmanned teaming among combat vehicles. The idea is to have a “robotic wingman,” operating in tandem with armored combat vehicles, able to test enemy defenses, find targets, conduct ISR, carry weapons and ammunition or even attack enemies.

Even if the enemy rounds being fired are from small arms fire and not necessarily an urgent or immediate threat to heavily armored combat vehicles such as an Abrams, Stryker or Bradley, there is naturally great value in quickly finding the location of incoming enemy small arms attacks, Army weapons developers explain.

Potential integration between HFD and Active Protection Systems is also part of the calculus, Klager explained. APS technology, now being assessed on Army Abrams tanks, Bradleys and Strykers, uses sensors, fire control technology and interceptors to ID and knock out incoming RPGs and ATGMs, among other things. While APS, in concept and application, involves threats larger or more substantial than things like small arms fire, there is great combat utility in synching APS to HFD.

“HFD involves the same function that would serve as a cueing sensor as part of an APS system” Klager said. ​

HFD for ground combat vehicles, when viewed in light of rapidly advancing combat networking technologies, could bring substantial advantages in the realm of unmanned systems. The Army and industry are currently developing algorithms to better enable manned-unmanned teaming among combat vehicles. The idea is to have a “robotic wingman,” operating in tandem with armored combat vehicles, able to test enemy defenses, find targets, conduct ISR, carry weapons and ammunition or even attack enemies.

Osborn previously served at the Pentagon as a Highly Qualified Expert with the Office of the Assistant Secretary of the Army - Acquisition, Logistics& Technology. Osborn has also worked as an anchor and on-air military specialist for National TV networks. He has a Masters degree in Comparative Literature from Columbia University. This article first appeared last year.