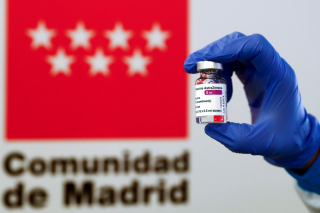 Many people have questions about the changing guidelines for the use of AstraZeneca’s COVID-19 vaccine. Here are some answers from infectious disease specialist Dr. Alexander Wong.

How is the AstraZeneca vaccine different from the other COVID-19 vaccines?

ChADOx1 nCoV-19/AZD1222 (AstraZeneca’s COVID-19 vaccine, also called the Oxford-AstraZeneca vaccine and COVISHIELD) uses a modified adenovirus “vector” to deliver the genetic code for the SARS-CoV-2 spike protein to the cell nucleus. This vector has been modified so that it can enter human cells, but once inside, it cannot replicate. That means it can’t cause danger to the vaccine recipient.

Once inside the cell, the DNA for the spike protein is delivered to the cell nucleus. There, the code is translated into messenger RNA (mRNA) that the cell can then use to manufacture its own spike proteins.

These spike proteins then help to stimulate the body’s immune system to develop antibodies. It is these antibodies that help protect us from infection and severe illness when we are exposed to the SARS-CoV-2 virus.

This leads to several practical advantages with AstraZeneca vaccine compared to mRNA vaccines — it does not have to stay frozen while stored and it can last for months at regular fridge temperatures. It is also less expensive to produce in large quantities.

While these efficacy data are slightly less than the reported efficacy from mRNA vaccines, AstraZeneca vaccine is completely effective at preventing severe illness and hospitalizations, like mRNA vaccines.

The overall efficacy differences between AstraZeneca vaccine and mRNA vaccines are minor. For most persons in Canada, the best vaccine is typically the one that you’re offered first, especially amid the current third wave sweeping across the country.

Why has its use been suspended in some areas? Is it linked to blood clots?

In early March, reports from various countries in the European Union linked use of AstraZeneca vaccine to the potential for rare but potentially fatal blood clots, termed “vaccine induced prothrombotic immune thrombocytopenia,” or VIPIT. Data from Germany suggest an incidence rate of roughly one per 90,000 shots. A recent update from the European Medicines Agency suggests an incidence rate of one per 100,000 shots across Europe thus far.

Researchers speculate that the vaccine may cause platelets to begin clotting, similar to a rare phenomenon caused by heparin, a blood thinner. Data is still emerging around the potential association between AstraZeneca vaccine and VIPIT, and the degree of risk remains unclear.

The reasoning in Canada (and other countries) for the age-related pause on the use of AstraZeneca has to do with a calculation of risk versus benefit for a given individual. The overall risk of death in persons under the age of 55 who acquire COVID-19 infection is very low in Canada.

When comparing the risk of death from COVID-19 in younger persons versus the risk of VIPIT from AstraZeneca vaccine, regulators made the decision to be cautious with their guidance, especially because Canadians have access to other vaccines such as Moderna and BioNTech-Pfizer and soon Johnson & Johnson vaccine as well.

As the evidence evolves, guidance for the use of AstraZeneca vaccine will likely change again.

Why are there different recommendations for different age groups — and why do they keep changing?

As described in the previous answer, there is an inherent balance between risk and benefit that expert groups needed to navigate when issuing guidance around AstraZeneca vaccine in the absence of definitive data. As we get older, our risk of dying of COVID-19 infection also increases. Thus, the balance between risk and benefit tips towards administration of the vaccine, which significantly reduces the likelihood of severe illness, hospitalization and death.

In younger people, this balance is more complicated, especially now with widespread circulation of variants of concern across Canada. These variants are known to be more transmissible and more deadly.

Early in March, initial recommendations from the National Advisory Committee on Immunization (NACI) in Canada suggested that AstraZeneca vaccine not be used in persons over the age of 65.

This was because the initially reported clinical trial data from December included a very limited number of people over the age of 65, so the efficacy of the vaccine could not be determined in this age group.

Shortly thereafter, supportive real-world evidence generated from the United Kingdom was reviewed by NACI and deemed to be sufficient to illustrate the efficacy of AstraZeneca vaccine in persons over the age of 65, and recommendations changed accordingly.

The changing recommendations by NACI and other guideline groups are a reflection of changing evidence and science, not the inadequacy of the vaccine itself. This is precisely how post-marketing surveillance is supposed to work with medicines and vaccines.

However, with such incredible scrutiny of this topic as a result of the global pandemic, trying to explain these concepts to the lay public has been challenging for regulators, public officials and health-care professionals alike.

What should I do if I’ve already had one dose of the vaccine, but it’s no longer recommended for my age group?

At present, this is unclear. Various studies are underway looking at combining different COVID-19 vaccines, particularly in the U.K., but there isn’t a good evidence base for this yet.

Public health guidance will be updated as evidence emerges, but if the association between AstraZeneca vaccine and VIPIT continues to hold firm, my best guess is that people in this situation will be offered a second dose of vaccine, but from a different manufacturer. Right now the current guidance remains to try not to administer different vaccines at different time points, if possible.

Is it effective against the new variants?

Preliminary published data from South Africa at a time when the B.1.351 variant was circulating widely suggested AstraZeneca vaccine had no reduction in the rate of mild to moderate COVID-19 infection in mostly young and healthy persons. However the trial included only small numbers overall.

The ability of the AstraZeneca vaccine to limit severe disease and hospitalization against the South African variant could also not be determined in this study due to very low numbers of young people otherwise becoming severely ill. More data is needed to better answer this question.