AUKUS: The Driving Force Behind Nuclear Propulsion in the Pacific 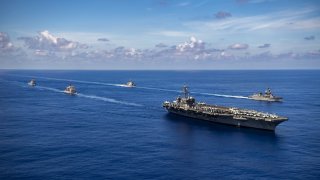 In its first comment on the new AUKUS partnership, The Economist said it represents the shifting of geopolitical tectonic plates. The defence implications for Australia and the regional and global geopolitical ramifications have been extensively covered by many security analysts and will continue to preoccupy them for some time yet. This article has the more modest aim of situating AUKUS in the plethora of groupings jostling to manage regional affairs.

The events of World War II forced home the recognition for Australia and New Zealand that the sun was about to set on the British Empire. Britain would steadily retreat inwards and could no longer ensure their security by dominating the seas around them. ANZUS embedded deepening military ties and arrangements between the three partner countries until the mid-1980s when, forced by Washington to choose between anti-nuclear sentiments and the reality of an alliance that had nuclear deterrence at its core, Wellington reluctantly parted company. That drew Australia into an even tighter military embrace of the US.

AUKUS is both a strategic bet on a fundamental reorientation of American attention and resources from the North Atlantic to the Indo-Pacific as the emerging theatre of geopolitical contest and a step-change in Australia’s military capability to bolster the other two allies’ military footprints in the region. It creates a new subgroup within the Five Eyes arrangement on intelligence sharing, elevating Australia above Canada and New Zealand as a privileged defence ally of the US and the UK.

AUKUS is both an acknowledgment of and a concession to the loss of US strategic primacy. It also relocates post-Brexit ‘Global Britain’ in the Indo-Pacific. Former Australian foreign minister Alexander Downer writes that the Anglo-American decision to help Australia develop nuclear-powered submarines is a substantial contribution ‘to the stability of a balanced Indo-Pacific region’.

Australia, Japan and the US were drawn to the ‘Indo-Pacific’ conceptual frame as a convenient analytical tool to incorporate India in a strategic construct that integrates geography, the ‘free and open’ principle and democratic values. The deep-seated reluctance of India and Japan to be drawn into an overtly anti-China collective defence arrangement, combined with the worsening maritime security environment around the Indo-Pacific, has prompted Australia to bet the house once again on joined-at-the-hip arrangements with its historical and post-1945 great and powerful protectors.

This means that India and Japan—the latter a US treaty ally—will need to reassess the relevance and importance of the Quadrilateral Security Dialogue forum of the four major Indo-Pacific democracies. The AUKUS announcement came on the eve of the first-ever in-person Quad leaders’ summit in Washington. At one level, the concrete evidence of a strengthened US commitment to the Indo-Pacific will be welcomed by India—the country left most exposed by the abrupt and chaotic US exit from Afghanistan if Taliban 2.0 revert to exporting terrorism—and Japan. The Indo-Pacific’s vast maritime space is the Quad’s origin and main focus of attention. The four navies are therefore at the heart of the forum.

Unless Japan embraces nuclear propulsion, will the other three navies form a de facto subgroup within the Quad? Also, seeing as how we are talking about the Indo-Pacific, was any consideration given to including India in the new constellation, not least to soften the optics of three Anglosphere leaders proclaiming their intention to take charge of Asian affairs?

France is the only European nuclear power with territorial interests in the Pacific. The recalled and now restored French ambassador to the US, Philippe Etienne, says that ‘much more’ than a business deal, the cancelled French submarine contract with Australia was ‘an essential part of our Indo-Pacific strategy and engagement’. As advisory council member of the French–Australian Chamber of Commerce and Industry Zoe McKenzie points out, France viewed the 50-year naval partnership as a much broader ‘strategic play: a skin-in-the-game investment in the Indo-Pacific but, equally, an elevation of the Australian market to a level it had never been granted by a European economy’.

With France furious at its perceived shabby treatment and its continuing strategic interest in the region, the development could be an opportunity for Paris to reroute its regional engagement through New Delhi and Tokyo rather than Canberra. That may be especially attractive to India, which has steadily deepened its relationship with France over several decades, including major defence purchases for the Indian navy and air force. Historical connections notwithstanding, France not Britain is India’s most important partner in Europe and the gateway to India’s engagement with the continent. There would be a certain symmetry to a reciprocal India bridge for French strategic engagement with the Indo-Pacific.

The nuclearisation of Australia’s navy could create ripples of unease in East Asian countries and spark a regional race for nuclear naval propulsion. Chung-in Moon, chair of the Sejong Institute and former special adviser on national security and foreign policy to South Korean President Moon Jae-in, reveals that the Trump administration had rebuffed Seoul’s request to share highly enriched uranium and technology for nuclear-powered submarines, citing proliferation concerns. The nuclear-power-tinged AUKUS has established a de facto hierarchy among US allies that is likely to increase Japan’s and South Korea’s interest in nuclear-powered submarines, he says. Will the relationship between the Quad, AUKUS and bilateral US–Japan and US–South Korean security treaties meld into a mutually reinforcing set of diplomatic–military arrangements within the variable geometry of the regional order?

AUKUS will also play into ASEAN’s fears about Southeast Asia becoming a battleground for Sino-US rivalry. Former Indonesian foreign minister Marty Natalegawa warns that AUKUS represents an escalation in regional ‘stealth underwater capability’ and ‘adds to the perception of an Indo-Pacific lacking nuclear stability and prone to costly miscalculation’. Along with the revitalisation of the Quad, AUKUS is a sharp reminder to ASEAN ‘of the cost of its dithering and indecision on the complex and fast evolving geopolitical environment’. He calls on ASEAN ‘to reassert its relevance’.

Ramesh Thakur, a former UN assistant secretary-general, is emeritus professor at the Australian National University and director of its Centre for Nuclear Non-Proliferation and Disarmament.Image: Department of Defence.

This article first appeared at the Australian Strategic Policy Institute