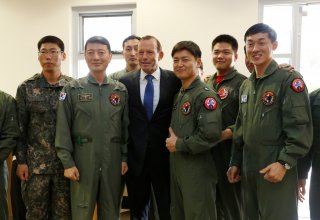 To be part of an official interaction with the Republic of Korea is to receive frequent expressions of thanks for Australia’s role in the Korean War from 1950 to 1953. As an impoverished nation faced aggression from a Soviet-backed North Korea and from Chinese People’s Army ‘volunteers’, Australia quickly joined a UN-endorsed, US-led coalition to resist the aggression. It was no small commitment for an Australia recovering from World War II, involving 18,000 personnel and major combatants from all three services. In all, 340 Australians died and more than 1,200 were wounded. Our role, now often forgotten in Australia, is remembered in South Korea.

But the gratitude, though clearly genuine, bears little on the current defence or wider bilateral relationship, reflecting the very different circumstances that followed and those that exist today. The Korean War coalition has been maintained as the United Nations Command, a shell framework for continuing involvement, led and nurtured by the United States Forces Korea (USFK), which maintains around 28,500 troops on the peninsula to deter potential North Korean aggression.

Australia has been one of the most active, sometimes the most active, participant in this continuing arrangement. Aside from ‘Five Eyes’ partners, the participation of other members is largely token. Since 2010, Australia has led the UNC (Rear), located in Japan, and has assigned officers, currently around six, to the UNC headquarters in Korea. From 2014, it also assigned an embedded star-ranked officer to the USFK, and has regularly sent personnel to major exercises on the peninsula (reduced since President Donald Trump’s meetings with North Korea’s Kim Jong-un).

It would be reasonable to conclude from this that Australia is one of the Republic of Korea’s closest defence partners, but developing the relationship has been difficult. Korea is frequently listed by Australia among those partners with which we will build a closer defence relationship to confront the rapidly changing strategic circumstances in the region. But in reality, on both sides the effort has been minor and lacking in commitment, resources and enthusiasm.

In 2013, both countries agreed to establish annual meetings of foreign and defence ministers, making Australia the only country other than the US with which Korea had such an arrangement. This seemed like a significant step forward, but the process has underdelivered, producing anodyne statements and a ‘blueprint’ for action that has been modest indeed.

Australia has bought almost all of its ‘big ticket’ defence capability from the US, the UK and Europe, and never from an Asian partner. The closest it came was in 2016, when Japan’s conventional submarine was for a time the front runner in Australia’s next-generation submarine program. Australia also shortlisted Korean shipyard DSME in 2005 for construction of two naval fleet replenishment ships, but the contract was awarded to Spanish shipbuilder Navantia.

This may be about to change, offering both countries the opportunity to reboot their defence cooperation and to build a much closer defence partnership.

A process to acquire 30 Korean K9 self-propelled howitzers, to be built in Australia by project partners Samsung Techwin (now Hanwha Defence) and Raytheon, was abruptly cancelled following funding cuts by the government in 2012. Korea was angered by this late cancellation, viewing Australia as an unreliable partner.

But the project has been revived and decisions are understood to be imminent. The units are expected to be built in Geelong, generating 350 jobs at a time of recession. Whether this is a priority capability for the ADF in current and projected strategic and budgetary circumstances is a debate that is all but absent.

Hanwha Defence has also been shortlisted, along with Germany’s Rheinmetall, as potential supplier of the Australian Army’s next generation of around 450 infantry fighting vehicles under the Land 400 Phase 3 procurement. If Hanwha wins this second contract, due to be signed in 2022, the basis for a much stronger defence partnership will be laid.

Hanwha has developed the AS21 ‘Redback’ to meet Australian requirements, and Korea will promote a version of this to replace the Bradley fighting vehicle in the US. Hanwha is evaluating potential Australian suppliers to the program and envisages a major build in Australia. For both countries, supply-chain vulnerability has become a greater concern, so decentralised manufacturing and diversification of suppliers have grown in importance.

It may provide impetus to the bilateral defence relationship, offering training and collaboration opportunities, and building understanding in Australia of Korea’s advanced defence industrial capability, and vice versa. These opportunities have been limited by Korea’s focus on the threat from the north, a parochial view that it needs no other substantive defence partners than the US and a related dismissal of the value of the UNC.

Defence exports to, and greater collaboration with, a reliable regional partner may stimulate a Korean rethink. Korean concerns, publicly muted but real, about Washington’s reliability and Beijing’s aggressiveness were acutely felt by Korea when China responded with stiff and damaging sanctions to its agreement to host a US THAAD battery in 2016. These concerns are growing. With North Korea sabre-rattling again, and a parlous relationship with Japan, Koreans will again be feeling increasingly vulnerable.

But even if Korean equipment is chosen by Australia, it takes two to tango. Canberra has not always seemed to attach a high priority to bilateral defence collaboration with Seoul, seeing the main benefit of on-peninsula exercising as offering further opportunities for developing interoperability with the US. Australia’s 2020 defence strategic update makes clear that the priority has decisively returned to the region from the Middle East.

With tensions rising, unease about US capability and commitment, and pressures on national budgets to repair the damage from Covid-19, the time may have come for both countries to reassess this relative detachment and to give greater priority to defence and security collaboration. It’s in the strategic interests of both to do so.