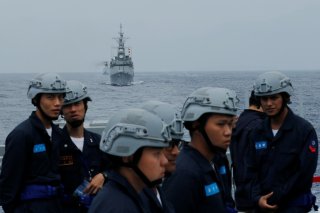 Here's What You Need to Remember: A Chinese attack on Taiwan, and the preparations for it, will not be narrowly focused on the island. Beijing understands that its best chances of success will involve pre-emption and seeking to degrade and push back US and allied forces as far from Taiwan as possible.

As fast as Australia is moving to strengthen alliances and regional partnerships, the pace of strategic change is moving faster.

China is building up its military forces at breakneck speed and preparing to strike at Taiwan. Xi Jinping hopes that surprise and overwhelming force will cow the democracies into inaction. In this Beijing risks misreading US President Joe Biden, who may not be Winston Churchill but is no Neville Chamberlain either.

The stakes for war and peace could hardly be higher. The Morrison government and the leadership of our defence, intelligence and security agencies understand these developments.

But it’s one thing to see you’re facing a crisis and quite another to know what to do. Strategic trends in the region are lifting the importance of northern Australia. Our north is, in fact, the essential southern rampart of the Indo-Pacific.

The outcome is to make the future of the Port of Darwin a central strategic question. This becomes clear by looking at the plans and purposes of Chinese military growth.

In the past fortnight, two US government reports concluded that Chinese preparations for an attack on Taiwan had reached a military tipping point for Beijing.

‘China’s increasingly coercive approach to Taiwan puts almost daily pressure on the cross-Strait status quo and increases the potential for a military crisis,’ the report says. It found that China’s military leaders ‘now likely assess they have, or will soon have, the initial capability needed to conduct a high-risk invasion of Taiwan if ordered to do so’ by Chinese Communist Party leaders.

Earlier this month, the US Department of Defense released its annual report on Chinese military capability. It says that ‘persistent military operations near Taiwan—and training for a Taiwan contingency—likely signals a greater urgency for the PLA to continue to develop and perfect its strategy and capabilities should PRC leaders look to a military option to achieve their objectives’.

China is growing its military forces at an astonishing speed. The awkwardly named People’s Liberation Army Navy is already the largest in the world with 355 major ships. A further 65 major ships will be added in the next four years.

The PLA Air Force and Navy have between them 2,800 aircraft, an increase of 300 from last year’s Pentagon report. China launched more than 250 ballistic missiles in tests in 2020—more than the rest of the world combined.

The Pentagon has dramatically revised its 2020 assessment that China’s nuclear warhead stockpile was in ‘the low 200s’. Now, ‘Beijing has accelerated its nuclear expansion, which may enable the PRC to have up to 700 deliverable nuclear warheads by 2027.’

Contrast this to the bizarre assessment of former prime minister Paul Keating, writing in the Australian Financial Review on 3 September (and gleefully reported in the Chinese media), that military aggression is ‘a posture China has never shown any sign of’.

Australia needs an urgent stocktake of its current defence capabilities and of our broader national capacity to withstand some tough military shocks. What might the early stages of an attack on Taiwan look like? If conflict does break out, Defence Minister Peter Dutton is correct that it would be ‘inconceivable’ for Australia not to be involved.

Our involvement would not be driven by a phone call from Biden. Australia will be involved because Beijing’s attack will rapidly draw in Japan, surrounding countries and US forces around the Indo-Pacific.

The world’s consequential democracies will not be able to tolerate an unprovoked attack on a liberal democracy of 23 million people. Australia had better hope that’s the case if we have any expectations that our security matters to friends and allies.

A Chinese attack on Taiwan, and the preparations for it, will not be narrowly focused on the island. Beijing understands that its best chances of success will involve pre-emption and seeking to degrade and push back US and allied forces as far from Taiwan as possible.

Published Chinese military doctrine holds that Beijing’s best prospects for a successful attack on Taiwan is if a major lodgement of forces can be achieved before the US mobilises its forces in the Indo-Pacific.

China will try to control a large swathe of air and sea space around Taiwan, excluding civil and military aircraft and ships from all other countries. Trade and movement through the South and East China seas will come to a halt. Fuel shipments, including to Australia, will cease. Cargo vessels won’t put to sea for fear of being sunk.

Communications and military satellites will be disabled. China will distract opponents with cyberattacks designed to disable critical infrastructure. This could mean attacks on the electricity grid, on hospital IT networks, on the communications and computer systems of ministers and government bodies.

Anything that can distract, slow down, confuse, hamper and misdirect allied responses to China’s preparations for an assault on Taiwan will be used.

Early in a crisis, the US Navy will put to sea and US military aircraft will have scattered from bases in Japan, Guam and Hawaii. With Australian agreement, significant numbers of these aircraft will be in northern Australia. American strategy is to spread its forces and keep them moving, making them as difficult a target as possible.

Xi’s speeches show that he sees opportunities for China in a world where ‘the East is rising and the West is declining’. Beijing’s relentless military incursions around Taiwan’s air and sea space are designed to test if the world will push back.

This is why the arrival of the AUKUS security pact and increasingly close cooperation of Japan, India, Australia and the US in the Quadrilateral Security Dialogue are so important.

Prime Minister Scott Morrison made the link clear in speaking at ASPI’s Sydney Dialogue this week: ‘Australians recognise instinctively that to remain a free, open, sovereign and prosperous nation we need strong and durable partnerships—now more than ever.’

The potential of AUKUS and the Quad is that they will be a platform for closer cooperation among democracies in areas such as quantum computing, artificial intelligence, and hypersonic and undersea technologies—fields into which China is pouring vast money and effort.

There is no more important step the Morrison government could take than to end the 99-year lease of the Port of Darwin to Chinese company Landbridge.

The threadbare excuses that were deployed to justify the lease in 2015 have long been abandoned by government and opposition. Now, when Morrison warns about the priority ‘to enhance the resilience of Indo-Pacific supply chains’, we must realise that our ports and airports are critical joints in those supply chains.

The Port of Darwin, and the Top End in general, is the place from which Australia can mount efforts to resist Chinese subversion of the Pacific islands. The port is also the place to which the US and other partners can disperse and sustain their forces while deterring Chinese aggression.

Six years into the lease, the promised development of infrastructure for tourism isn’t happening. The strategic outlook has changed fundamentally. Landbridge’s presence is now a bone in the throat preventing the development of Darwin as a facility for greater engagement by the AUKUS and Quad partners.

Frankly, this is a problem our bureaucracy has denied for too long. The government and opposition should make a bipartisan commitment to end the lease after the next federal election by passing enabling legislation if necessary. With that done, there should be a major effort to expand Darwin Port and to refurbish and add to the infrastructure of airbases in the Top End.

In addition to the now decade-long US Marine Corps presence in the north, Australia should invite AUKUS and Quad partners to locate military units with their Australian Defence Force counterparts in the Top End.

Fundamentally, this is an exercise in strengthening deterrence to make it clear to China that military adventurism towards Taiwan or elsewhere is too risky to consider.

Failure to strengthen deterrence will lead to war. If Xi concludes we are pushovers, China will push the democracies over.

A vital step in showing that we are stronger than that is to resume the ownership of the Port of Darwin as the crucial strategic asset it really is.

Peter Jennings is ASPI’s executive director and a former deputy secretary for strategy in the Defence Department. A version of this article was published in the Weekend Australian.

This article was originally published by the Australian Strategic Defense Institute.